How to Choose End Load or Balanced Bat 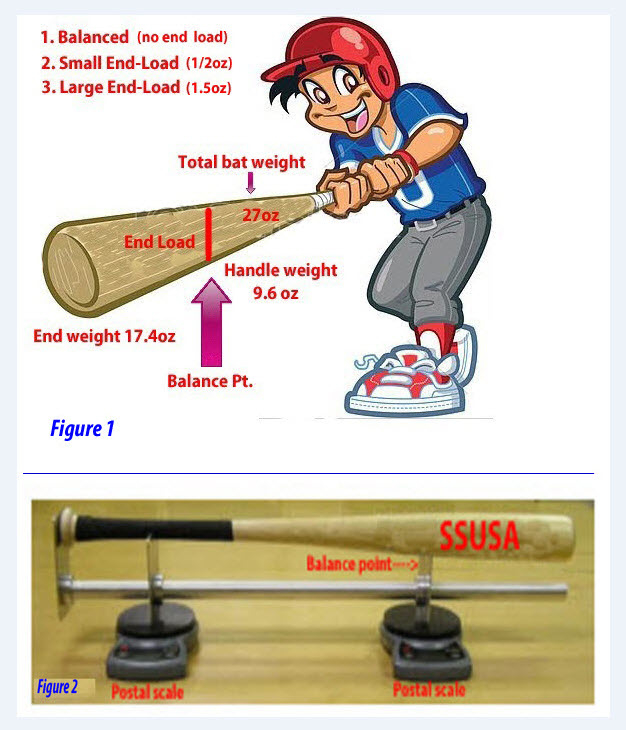 Ever notice that a heavier bat, such as a 30-ounce stick, may seem to swing easier than a 28-ounce bat?  How can that be?

It all has to do with what the physics guys like to call the “MOI” or “Moment of Inertia.”  MOI in softball terminology is simply how heavy a bat feels when held in your hands and how difficult it is to swing.

(Scientific definition of MOI: “The moment of inertia, or MOI, is also known as the rotational inertia of a rigid body that determines the torque or force needed for a desired angular acceleration about a rotational axis.”)

Okay, so how much force/torque will a batter have to exert on the bat handle to make it go from a resting state to moving fast in an arc?  Well, it depends on the bats’ mass/weight distribution and the pivot point on the handle determined by where the batter has placed his or her hands.

It’s not the bat’s absolute weight that appears on the end knob sticker that determines MOI.  It’s the distribution of the weight (see figure 1).  It’s easier for softball players to discuss this phenomenon using the “swing-weight” of the bat (discussed below) than it is to use the scientific number that is generated in an MOI test.

A familiar question to a hitter: “Is your bat balanced or is it end-loaded?  In theory, a balanced bat has more of its weight toward the handle and less weight toward the end; for an end-loaded bat it’s the reverse.  Every bat has a balance point (center of mass) that can be measured with a balance scale or even using your finger for a rough estimation.  As a rule of thumb, the end-loaded bat has a low handle weight of typically 10 ounces or less and the remainder is considered end-weight.

The distinction between light or heavy swing weight boils down to the location of the balance point on the bat and its moment-of-inertia value.  The closer the bat’s balance point is to the handle, the easier it is to swing and vice versa.  Therefore, an end-loaded bat will be harder to slow down through the hitting zone than a balanced bat but it’s harder to get started.

Bat speed is always a key factor for hitting the ball with greater force, but don’t overlook the mass or weight of the bat.  You can swing a whiffle ball bat really fast, but try hitting the Trump softball any distance at all with its little or no mass.

How can the average player measure swing-weight?  First, find the balance point with a scale or using your finger. Second, by means of two postage scales, lay the bat on the scales using the center of mass point on the second scale.  Then read both scales to find the handle weight and the end weight; should add up close to the bat’s total weight (see figure 2).

Power hitters who are strong tend to prefer bats with a heavy swing weight because they can swing the bat fast enough where the extra inertia of the bat makes for a more active collision with the ball.

Players who are not as strong, or who cannot swing a heavy bat quickly, or desire more bat control, tend to opt for bats with a lighter swing weight.  I’m not advocating the usage of either balanced or end-load as they bring different elements to the softball swing. Remember that swinging bats of different swing-weight can affect your timing as each requires a different force that then determines meeting the ball at the right time.  Using varying swing-weights can really mess up your timing.  Weigh all your bats jotting down the swing-weight numbers so you can always use comparable bats.

Unfortunately, the swing-weight is not made available by most manufacturers, so you’ll have to figure it out yourself.  I recommend swinging bats with nearly the same swing-weight, either balanced or end-loaded, both in practice and in the game to maintain good timing. Happy hitting!