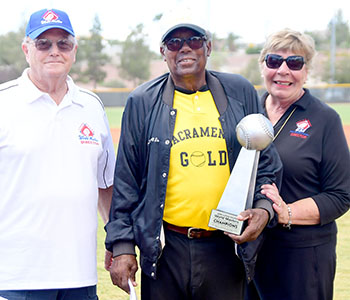 SACRAMENTO, Calif. - Norm Blackwell, 84, is one of the most decorated softball players in Sacramento history, and a manager of teams winning 90 World, National and Regional titles. Blackwell’s Sacramento Gold won the Triple Grand Slam in 2016.

Blackwell is being inducted into the Senior Softball USA (SSUSA) Hall of Fame on Tuesday, July 31, at noon at the Sacramento Softball Complex.

“Norm Blackwell represents the best qualities of our sport,” said Terry Hennessy, SSUSA chief executive officer. “He is not only an exceptional athlete, but he has provided an excellent example – and training – for ballplayers of all ages.”

Norm has managed and played for the Sacramento Gold for two decades.

Blackwell was offered a contract to play semi-pro ball in 1952, but turned it down on the advice of his relatives, because he would have had to go down to Savannah, Ga.

There’s a small piece of Sacramento baseball history that sits tucked away in the cramped confines of a narrow storage room in the backyard of an Oak Park home. Here, more than 100 awards, trophies and other accolades hang on the walls. Chipped and broken bats lie on the ground. And old baseballs and baseball gloves sit on shelves collecting dust.

Norman Blackwell Sr., the recipient of it all, sits on a chair in the center, revealing the story of each piece.

“My wife had this trophy room built, because she got tired of all of it being inside the den,” Blackwell explains as he looks at a picture of himself running with the 1996 Olympic torch in downtown Sacramento. The torch is also in this room, sitting on the bottom shelf in a case of wood and glass.

The piece represents one of the 84-year-old’s many accomplishments, most acquired during his 70 years of playing baseball.

Blackwell, who was born in Santa Monica, moved to Oak Park with his mother and siblings in 1941, shortly after his father died. The family settled into a house on 32nd Street and Second Avenue, a street that’s now part of Highway 99. Not long after, Blackwell started playing ball.

Growing up in the ’40s and ’50s and being the only black person on the team, Blackwell says he struggled to find acceptance on the diamond. That struggle only grew after he transferred from C.K. McClatchy High School to Elk Grove High School his senior year after his family moved to south Sacramento.

“I caught a lot of heck as the only black in the whole league,” he explains. “My last name—Blackwell—they took the “well” off. They called me ’Black N,’ ’Black Sambo,’ everything. That was up in the stands all the time. I come up to bat as a 17-year-old kid, and I wasn’t used to that coming from Oak Park.”

Although Jackie Robinson had already broken through boundaries as the first black man to play Major League Baseball in 1947, the country’s racial tensions still trickled down into the sport. In 1952, while playing semipro ball for the McClellan Pacemakers, the Sacramento County Baseball League team, Blackwell was offered a contract with the St. Louis Cardinals organization.

But Blackwell turned down this big shot on the advice of a friend. At the time, the Cardinal’s farm team that he would play for was located in Georgia, which, like most states in the south, was still segregated and, thus, a hostile, dangerous place for African-Americans.

“A white guy told me, he says, ’I want you to play ball, but down there, they won’t mess around. There won’t be any fighting, they just go on and shoot you or hang you,’” Blackwell says. “So I didn’t sign.”

A few years later, when Blackwell was playing for the then-Sacramento Junior College, he was offered one more chance with the Cardinals, but by then, he was 26 years old and married. He’d started a family, and was making more money in Sacramento than the team offered him. He decided to stay, and worked at Mather Air Force Base. Later, he coached Little League.

“In a way I [regret not signing], but I made sure that I gave something back, especially out here with the Little League,” he said.

For decades, Blackwell lived vicariously through his sons and the kids he coached in Oak Park Little League. Seven of his players even went on to sign contracts with professional baseball teams.

Some of those players include his sons Orlando Blackwell (San Francisco Giants) and Juan Blackwell (New York Yankees).

But these days, he says, Oak Park Little League is struggling to produce talent. However, Blackwell adds, the current organizers aren’t entirely at fault.

“When we ran Little League … we had more family support and community support,” he says.

In 1999, he was honored as the partial namesake to the Crump-Blackwell baseball diamonds (Harrison Crump, a former coach and league president, is the field’s other namesake) in McClatchy Park to honor his 20 years in coaching.

Now, although Blackwell no longer coaches, he stays close to the league, working as a volunteer grounds keeper for the Crump-Blackwell fields. He also plays for the Sacramento Gold, a senior softball team.

“I still play for the love and the fun,” Blackwell says. “Some of the guys [on the team] criticize me saying, ’Hey, Norm, you gotta take it seriously here.’ I take it seriously, but I’m just having fun doing it.”