A total of 192 teams competed across eight divisions in the opening session.

Starting with the 12-team Men’s 55 Major Plus Division, Sommerville Softball (CA) captured the ultimate prize of the Triple Grand Slam.

In bracket play, Sommerville won three straight games to reach the championship game, where the team suffered its lone loss of the tournament, 24-22, against NW Legends (WA). Sommerville would avenge its loss with a 31-29 win in the “if” game, to take home the World Masters Championship and Triple Grand Slam. 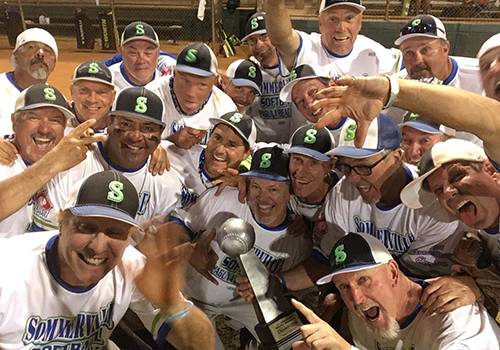 In the largest division of the Men’s 55 age group, the 37-team Men’s 55 Major Division ended in anticlimactic fashion. Ohio Elite/Creative Stucco/Louisville Slugger won the division via forfeit, with WC Thunder 55 (IL) unable to compete in the “if” game due to injuries, after winning the championship game, 37-33. 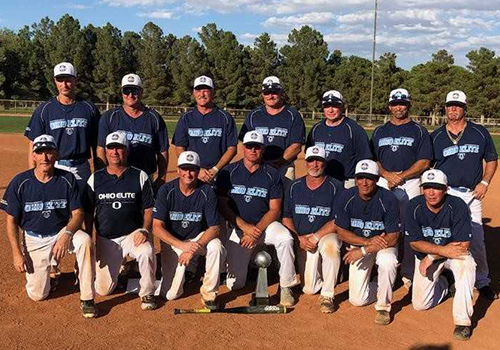 Ohio Elite entered the National Pod as the No. 9 seed and won five straight games to secure their spot in the championship game.

So Cal 55, the No. 12 seed in the American Pod, started off strong with four straight victories, before suffering back-to-back losses to finish in third place for a second straight season. Rock n Legends, the No. 8 seed in the National Pod, got off to a rough start, losing back-to-back games to start off bracket play. The team would regroup, however, rattling off six straight games to eventually finish in fourth place.

55 OH MY and West Coast Water I (NV) both reached the final day of play as well, falling short of the top four finishers.

D&K Tradition (CA), the Western National Champion, was the default US National Champion with no opponent from the East. Entering bracket play as the No. 13 seed in the American Pod. D&K Tradition posted an even 2-2 record in the bracket to fall short of the completion of the Triple Grand Slam.

In the 33-team Men’s 55 AAA Division, Ameriprise FL Legends entered bracket play as the top seed following its 20-16 win over Michael’s Automotive Group (WA) in the US National Championship game.

Ameriprise FL Legends would fall just short of the ultimate prize of the Triple Grand Slam, as the team fell in the championship game, 23-14, against Crossfire (TX). Crossfire posted a perfect record, going 2-0 in seeding play and 6-0 in bracket play. 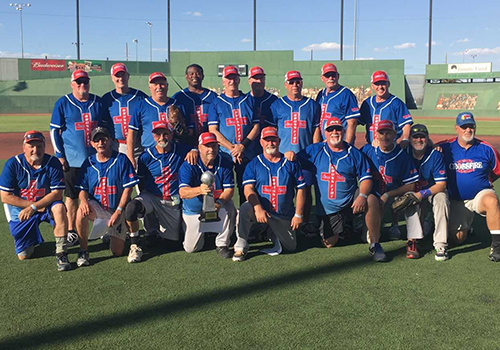 Fresno Heat made a solid push through the elimination side of the bracket with four straight wins en route to their third-place finish, while Texas Heat 55 finished in fourth place.

New Mexico Boomers won the 10-team Men’s 55 AA Division, as the team completed an undefeated weekend, going 2-0 in seeding and 4-0 in bracket play, including a 16-14 win over Scrap Iron Mile High (CO) in the championship game. 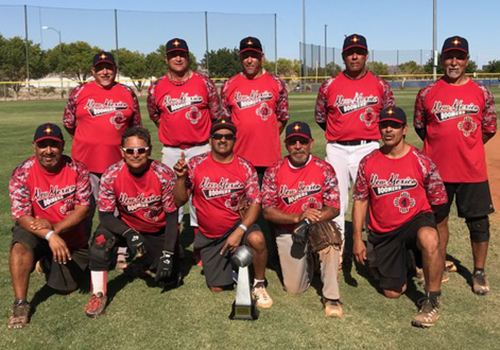 For New Mexico Boomers, the team finally got over the hump, after posting back-to-back runner-up finishes at the WMC in 2016 and 2017 in the Men’s 55 AA Division. The team previously won the World Masters in 2014 in the 50 AA Division.

Additionally, this is the team’s second major championship of the 2018 calendar year, as New Mexico Boomers won the Tournament of Champions back in February.

Longshoremen 55 (VA) and Spin Tees (WA) played for the US National Championship, with Longshoremen earning a 23-16 victory. 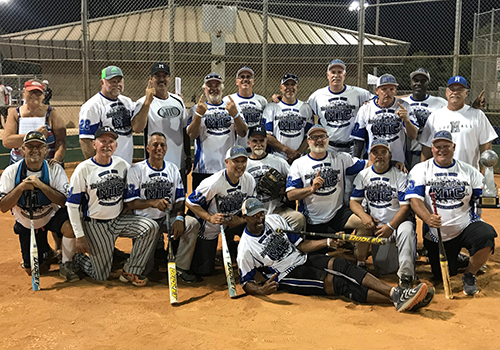 During seeding play, Summy’s defeated Hollis Appraisals 60’s (FL), 19-5, in the US National Championship game. Hollis Appraisals would go on to finish third in bracket, while Texas Crush Sixties rounded out the top four finishers. 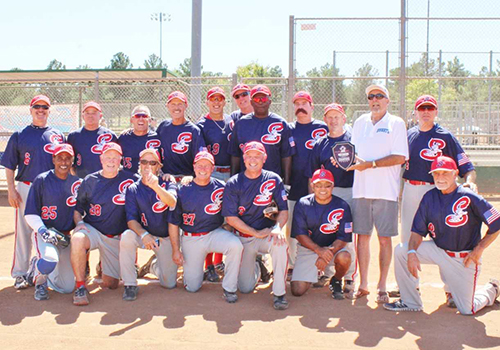 In the 31-team Men’s 60 Major Division, Agway Steelers (Ontario, Canada) brought the championship North of the Border, as the team went 2-0 in seeding play, before remaining perfect in the bracket with a 6-0 record, including a 19-5 win over Minnesota Masters/Ancell in the championship game. MN Masters/Ancell got the championship game coming out of the elimination side of the bracket with wins over Windy City Softball (IL) and Sin City Softball (NV). The team started off with three straight wins in bracket play, before falling to Agway Steelers to drop down into the elimination bracket. 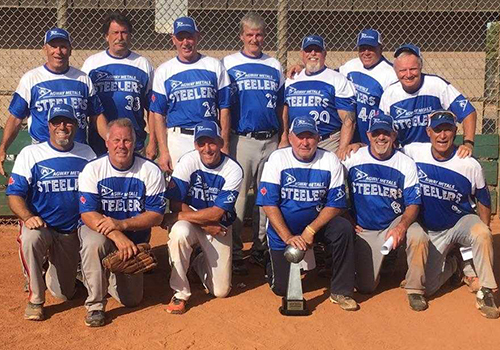 Sin City Softball, the top seed and US National Champion following its thrilling 22-21 victory over Tasty Pizza (MN) in the US National Championship game, was unable to defend its home turf and complete the Triple Grand Slam, finishing in third place. Tasty Pizza had a solid run through the elimination side of the bracket with four straight wins, before being eliminated by MN Masters/Ancell, to finish outside of the top four. 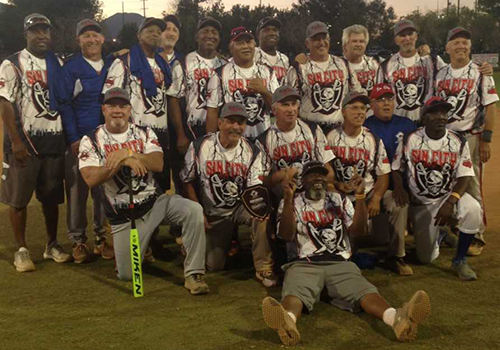 Cardot/Madalena Construction (NY) also finished just outside of the top four, as the team rattled off five straight wins in the elimination side of the bracket, before being knocked out by Windy City Softball.

Rounding out the eight teams that played on championship Sunday were Promotion (NJ) and Smith Mason Dudley (LA).

The largest division of the entire first session, the 43-team Men’s 60 AAA Division, saw the bracket split between the American (21 teams) and National (22 teams) pods. 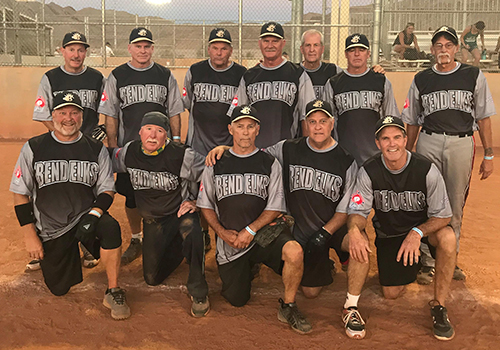 Looking to capture the Triple Grand Slam, Senior Bend Elks advanced to the final day of play, but would be eliminated in the team’s first game of the day against Crossfit/Great Clips (NC).

Chicago Prime downed Northwest Softball Club/Underdogs for a second time, 21-17, to win the championship. Chicago Prime, the No.13 seed in the American Pod, competed a perfect bracket going 7-0. 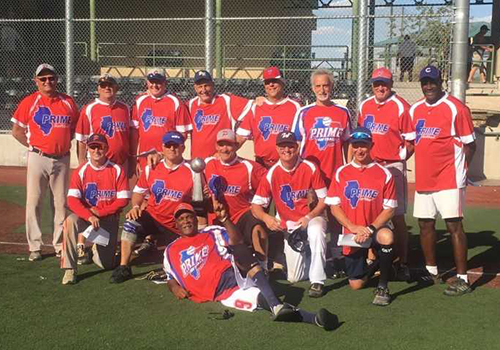 Scrap Iron Xplosion (CO) and CJ & S Express (AZ) also advanced to the final day of play to be among the final eight. 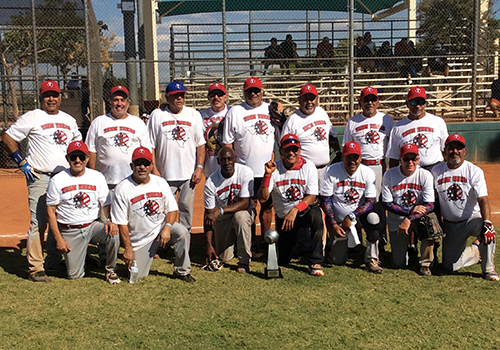 Northwest Silver 60’s (WA), the No. 12 seed, made a valiant run through the elimination bracket with six straight wins en route to a third-place finish. Vancouver-Wooly’s (WA) rounded out the top four finishers.