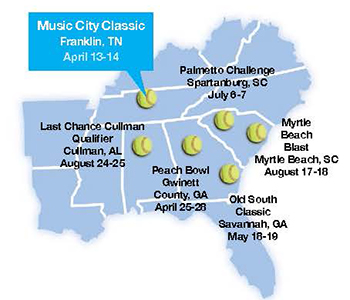 SSUSA has been asked to offer more tournaments throughout the Southeast – and we heard you!

Senior Softball-USA (SSUSA) added six National Qualifiers in the Southeast Region for 2019, marking the single biggest expansion in a region in more than a decade for SSUSA.

These new qualifiers offer affordable entry fees and competitive divisions - rosters will be checked with the best rating system in the sport.

There are several promotions for teams playing in the Southern Showcase: Music City Classic, Peach Bowl, Old South Classic, Palmetto Challenge, and *Southern Championships (TOC Qualifier).
- $100 off Eastern National Championships if you play in three of the five qualifiers ($100 off of Palmetto Challenge if you play in first three qualifiers).
- Play in four of the five and win a FREE BAT! ($100 off of the Southerns for teams playing in first four qualifiers).
- Play in all five and take $200 off the Eastern Nationals.

Along with these six new qualifiers, SSUSA will host the usual four major qualifiers in the region, which are designated as Tournament of Champions (TOC) qualifiers.