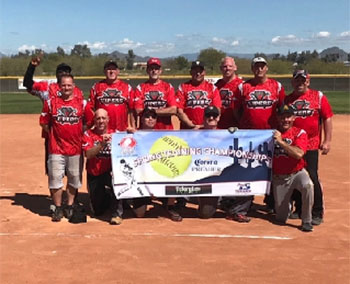 CT Vipers/Miken (IL) made the most of its 1,500 mile journey, winning the Men's 50 Major Division at the Spring Training Classic in Arizona.

PHOENIX - The 2019 Spring Training Classic was held here March 1-3 with 41 teams in action, representing three of the four corner states: Arizona, New Mexico and Colorado; as well as Nevada, Texas, Washington and Illinois.

The Men’s 65-75 age teams kicked off the tournament on March 1 at Rose Mofford.

In the four-team Men’s 65 Major Division, top seed Rocco’s (AZ) went undefeated over the two days of competition, going 4-0 in seeding play, and 2-0 in bracket, including a 30-25 win over 19 Hitmen (AZ), in the championship game. AZ Ancient finished in third place.

The tournament continued Saturday with the Men’s 50-60 age divisions in play at Victory Lane and Rose Mofford.

Beginning with the five-team Men’s 50 Major Division, No. 3 seed CT Vipers/Miken (IL) came out of the single elimination bracket as champions, defeating Arizona Heat 15-11 and top seed Thunderstruck (AZ) 24-21 in the championship game.

In another five-team division, the Men’s 50 AAA Division, the No. 3 seed slot would be the lucky spot once again, as No. 3 Graywolves (NM) won the single elimination bracket, defeating AZ Prime Time 20-13 and Xtreme (AZ) 21-11 in the championship game.

In the seven-team Men’s 55/60 Major Division, Arizona Scorpions 55 ran through bracket play with a perfect 4-0 record, including a 29-10 win over Arizona Old School 55 in the championship game. Rock N Legends 9 55 (TX) finished in third place after winning three straight games in the elimination side of the bracket, before falling to Arizona Old School in the third-place game.