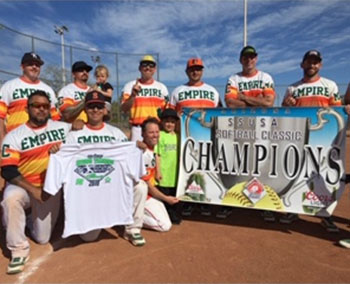 In the 12-team Men’s 40 Major Division, Empire (AZ) ran through bracket play, recording a 4-0 mark, including a thrilling 23-22 walk-off win (8 innings) over 4 The Fallen (AZ) in the championship game.

Trailing 21-17 heading in the open inning, 4 The Fallen rallied with five runs to go ahead 22-21. Empire knotted the game at 22 all plating one run in the bottom of the open, to send the game into extra innings. In the extra frame, 4 The Fallen went scoreless in their top of the inning, while Empire scored the lone run it needed to take home the 23-22 victory.

4 The Fallen reached the championship game with a valiant run through the elimination side of the bracket, with five straight wins, before running out of gas.

Arizona Old Spice finished in third place, while Sudden Impact (NM) finished in fourth place to round out the top four finishers.

In the six-team Men’s 40 AAA Division, top seed Northwest 40 (WA) posted a flawless 3-0 record in bracket play, including a 28-26 win over Phat SC (AZ) in the championship game.