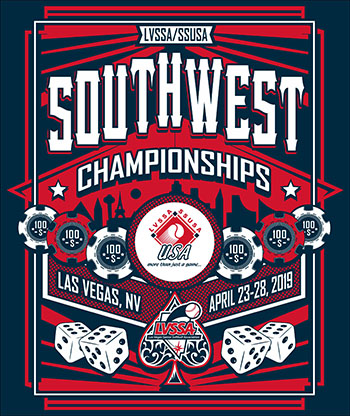 LAS VEGAS - Sin City continues to be the mecca for Senior Softball, as the eighth annual LVSSA/SSUSA Southwest Championships, held here April 23-28, eclipsed the 200-team plateau for the third consecutive year, with 220 teams in 2019.

The first session of the tournament included the Men’s 65-85 age divisions, playing April 23-25.

Among the top four seeds, Top Gun Elite would be the one team to finish within the top three, following a 4-2 record in bracket play, en route to their third-place finish. Both of Top Gun Elite’s losses in the bracket came at the hands of Arizona Ancient, including a 22-20 loss in the third-place game.

AZ Ancient began bracket play with three straight wins, before falling to Timberworks/Adidas (CA) 26-15 to drop the team down into the elimination side of the bracket.

Timberworks/Adidas, the lone Major Plus team in the division, posted a perfect 4-0 record to reach the championship game.

The championship game between Timberworks/Adidas and AZ Ancient would not be played with AZ Ancient forfeiting the final game. 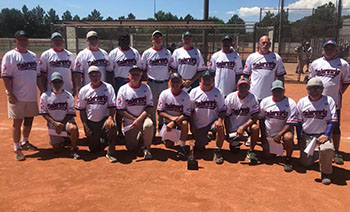 As the highest finishing Major team, AZ Ancient would also earn first place awards and a berth to the 2020 Tournament of Champions for the Men’s 65 Major Division.

Hometown team Sin City Stars (NV) finished in fourth place, while R&R 65s (CA) made a valiant run through the elimination side of the bracket with four straight wins to reach Championship Thursday, and finish among the final six teams. Scrap Iron High Octane (CO), who entered bracket play as the No. 14 seed following an 0-2 showing in seeding play, rebounded with a 3-2 mark in the bracket to finish in the final six as well.

After being upset in their second game in the bracket, the Warriors rattled off an incredible six straight elimination games, including a thrilling 16-15 walk-off win over Sidewinders Desert (AZ) in the championship game, to force the “if” game.

Warriors would be unable to complete the comeback, falling 20-11 in the “if” game. Coming off its victory at the Spring World Championships, Sidewinders Desert finished the Southwest Championships with a 5-1 record to win their second major tournament of the season.

No Guts, No Glory (CA) began the tournament with three straight wins, before falling in back-to-back games to finish in third place, while Bucky’s Casino rounded out the top four finishers after winning three straight elimination games.

In the five-team Men’s 65 AA Division, Las Vegas Desert Heat (NV) defended its home turf, going 3-0 in bracket play, including a thrilling 13-12 win over top seed Classics (UT) in the championship game. The Classics were held scoreless in the final three innings, while LV Desert Heat scored five runs in the bottom of the sixth to hold on for the win. 911 Softball Club (CA) finished in third place.

In the nine-team Men’s 70 Major Division, top seed and hometown team Ryan’s Way (NV) came back to avenge its 16-3 loss in the championship game against Sidewinders (AZ), with a 24-14 victory in the “if” game. After losing their first two games in the three-game guarantee bracket, Game On (CA) came back with three straight wins en route to their third-place finish.

For Ryan’s Way, this marks the team’s second major championship, as they won the Spring World Championships.

In another nine-team division, the Men’s 70 AAA Division, Sacramento Islanders (CA) completed a perfect week, going 2-0 in seeding play to earn the No. 2 seed, before running off four straight wins in bracket, including a 14-12 victory over Doughboys (NV) in the championship game. After dropping their first two games in the three-game guarantee bracket, Doughboys went on a Cinderella run, winning five straight games, before running out of gas in the championship game. Warriors (HI) finished in third place.

The eight-team Men’s 70/75 Silver Division, which included one 70 AA team and seven 75 AAA teams, featured a four-game round robin to seed into a modified single elimination bracket.

After posting a perfect 4-0 record, Franklin Loan Center 70 (CA) entered bracket play as the No. 1 seed. The team continued its flawless play in the bracket, going 3-0, including a 22-5 win over Arizona Outlaws 75 in the championship game. 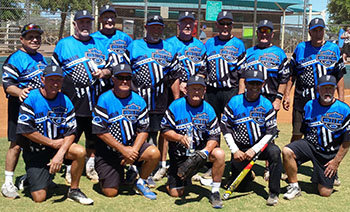 With its win, Franklin Loan Center earned its TOC berth for the 70 AA Division; while AZ Outlaws, the highest finishing 75 AAA team, earned a TOC berth for its respective division.

Omen (CA) swept California Connection by scores of 21-7 and 19-7, respectively, to win the best two-out-of-three game series in the Men’s 75 Major Plus Division.

In another best two-out-of-three game series in the Men’s 75 Major Division, Sidewinders (AZ) swept Findlay Automotive Scorpions (AZ) by scores of 19-2 and 13-7, respectively.

The Southwest Champs continued with the second session, as the Women’s 40-50 and Men’s 40-60 age divisions took their turn on the diamonds, April 26-28.

In the four-team Women’s 40 Major Division, TKP (CA) posted a perfect 3-0 record in the bracket, including a 19-10 win over top seed, Fun Bunch (CA), in the championship game. Colorado Ohana rounded out the top three finishers. 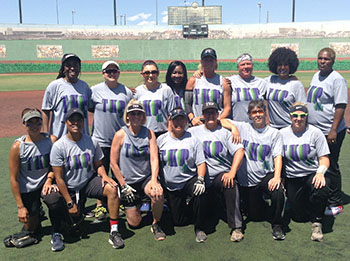 In the 18-team Women’s 40/50 AAA Division, Custom Truck (NV), one of six teams to go 2-0 in seeding, continued its solid play in the bracket. The team completed a perfect weekend, rolling through the bracket with a 5-0 record, including a thrilling 21-20 win over All Out (CA) in the championship game.

Entering the open inning facing a 17-12 deficit, Custom Truck plated nine runs in the top of the open to take just its second lead of the game, 21-17. The lead would be just enough for Custom Truck, as the team held on for the one-run victory.

All Out won three straight elimination games to reach the championship game.

In the nine-team Men’s 40 Major Plus Division, Fattboyz Dudley/Elite (CA) dominated bracket play, going 4-0, including a 34-26 win over All-American Athletics (OR) in the championship game. All-American Athletics, the No. 2 seed, bounced back from an upset loss in its opening game of the bracket, winning four straight games to punch its ticket to the championship game.

Building off their momentum from the third-place game victory, FunHavers avenged its earlier loss against Cali Gold with a 26-15 win, forcing the decisive “if” game. In the end, Cali Gold avoided the dreaded double-dip, defeating FunHavers 29-12 in the winner-take-all game.

Cheap Suits/Republic (CA) finished in fourth place, following a run of three straight wins in the elimination side of the bracket.

In the nine-team Men’s 50 Major Division, L.A.F. (CA) posted a 2-0 record in seeding, before going 4-0 in bracket play, including a 22-15 win over 4 The Fallen (AZ), in the championship game, to cap off the perfect weekend. Bouncing back from an 0-2 showing in seeding play, Stadium (CA) registered a 3-2 record in bracket play, en route to a third-place finish. Top seed ShowTime So Cal (CA) finished in fourth place.

The 16-team Men’s 50 AAA Division saw Grayed & Confused (UT) run through the tournament unscathed. The team posted a 2-0 record in seeding play to secure the No. 2 seed, before rolling through bracket play with a 5-0 record, including a 24-11 win over Homeboys (HI) in the championship game. 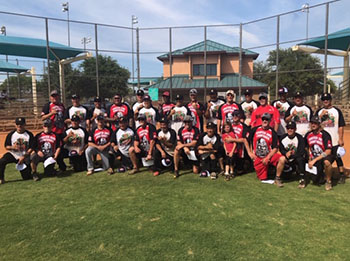 After falling to Advil Knights (CA) 24-23 earlier in the bracket, Homeboys rattled off three straight wins in the elimination side of the bracket to reach the title game.

In a best two-out-of-three game series for the Men’s 55 Major Plus Division championship, which would go the distance, Sommerville Softball (CA) outlasted Elite/Dudley (AZ). Game one went to Sommerville, following a 22-19 win; while Elite/Dudley evened the series with a 21-20 nail-biter. In the rubber-match, Sommerville took the decisive final with ease, 26-16. 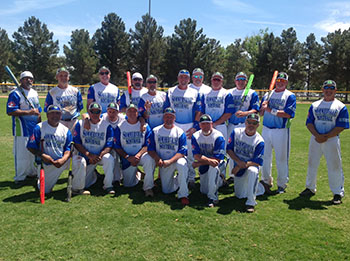 In the 17-team Men’s 55 Major Division, top seed Team Rawlings (CA) recorded an unbeaten weekend, going 2-0 in seeding to lock up the No. 1 seed, before winning five straight bracket games, including a 25-15 win over Vegas Strong (NV) in the championship game.

WPI/Wilson & Sons (ID) finished in third place, while Arizona Old School won five straight games in the elimination side of the bracket en route to their fourth-place finish.

Graywolves 55 (NM) made the most out of bracket play, posting a perfect 4-0 record, including a thrilling 13-12 win over Thunderstruck 55 (AZ) in the championship game. Top seed Scrap Iron-Colorado Home Fitness finished in third place, while So Cal Riptide (CA), the lone 55 AA team, had a solid showing, finishing in fourth place.

Horn Softball 55 (CA), and Team Panthers (UT), the lone 50 AA team, each won a pair of games in the elimination side of the bracket, to advance to Championship Sunday.

In the eight-team Men’s 60 Major Division, top seed R & R Rookies (CA) completed an undefeated weekend, going 2-0 in seeding to earn the No. 1 seed, before winning four straight bracket games, including a 21-14 win over Last Call (NV) in the championship game. No. 2 seed Samurai (CA) finished in third place after winning a pair of games in the elimination side of the bracket, before falling in the third-place game.

Top seed Weakened Warriors (CA) finished in third place, while Sidewinders (AZ) rounded out the top four finishers, after making a strong surge through the elimination side of the bracket with four straight wins.

In the winner-take-all “if” game, Family defeated Los Vatos Viejos 21-12.