Senior Softball-USA (SSUSA) had a busy slate to kick off the Month of May, with four tournaments held during the opening week of the month. However, Mother Nature had other plans, as rain from Texas to Pennsylvania caused numerous delays and cancelations in all four tournaments.
SSUSA would like to thank the grounds crew at the various parks across the four tournaments for all of their hard work.
Texas State Championships Move Back to Dallas
Beginning with the Texas State Championships, April 30 - May 5, in Dallas at Kiest Park, 54 teams attended the TOC qualifier in the Lone Star State, as Big D once again played host to the tournament. Dallas hosted the tournament from 2008-2012, before Houston (2013-2015), Austin (2016), and El Paso (2017-18) all had their turns.
During the first session, Men’s 65 - 80 age divisions, games were played on Tuesday and Wednesday, before rain came in and washed out Thursday’s games.
In the seven-team Men’s 65 Gold Division, Gonzalez Insulation (TX), the lone Major team, bounced back from an 0-2 showing in seeding play on Tuesday, by going 3-0 in the bracket on Wednesday, including a thrilling 15-14 win over top seed Team Texas San Antonio to advance to Thursday’s championship game.
As the only unbeaten team remaining in the bracket prior to the rain-out, Gonzalez Insulation earned the first-place finish. As the highest finishing AAA team, Team Texas San Antonio would earn a TOC berth for its respective division.
There was no third-place finisher due to the rainout, as Houston Classic Seniors (TX), Texas Thunder, CenTex 65’s (TX), and Hooks (TX) were the other four teams remaining in the elimination side of the bracket.
In the six-team Men’s 70 Gold Division, the top two seeds, San Antonio Legends (TX) and San Antonio Silver Streaks (TX), met in the winner’s bracket final on Wednesday. Silver Streaks defeated Legends, 19-7, to punch its ticket to Thursday’s championship game.
With no remaining games held, Silver Streaks, the lone Major team, earned first place honors. As the highest remaining AAA team, Legends earned a TOC berth for their respective division.
STILL (TX) and Grey Sox (TX) were the other two remaining teams in the elimination side of the bracket, tying for third-place.
In the Men’s 70/75 Silver Division, El Paso Nine-Elevens (TX), 70 AA, and Hill Contracting (TX), 75 AAA, played a best two-out-of-three game series. With just one game played due to the rain-out, Hill Contracting took first place via its 10-7 win.
The three-team Men’s 80 Gold Division featured LOTA Softball (AR), Major, Antiques of Kansas City (KS), AAA, and San Antonio 80s (TX), AAA, play a double round robin to seed. With no bracket games played, LOTA Softball earned the first place finish due to its perfect 4-0 record in pool play. Antiques of Kansas City and San Antonio each finished with identical 1-3 records, splitting their head-to-head games. San Antonio won the first game, 8-7; while Antiques of Kansas City won the second game, 24-22. Antiques of Kansas City finished in second place due to least runs allowed (30).
Play resumed on Friday, with the Men’s 40-60 age divisions taking the field.
However, rain would again rear its ugly head for a second time, washing out Saturday’s matchups and causing a reschedule on Sunday to a game-shortened single elimination format.
In the three-team, Men’s 40 Major/50 Major Plus Division, top seed Escobar Body Shop 50 (TX) defeated Vivid/Easton (TX) in a thrilling 19-18 walk-off victory, to win the division.
Heading into the top of the open, Vivid/Easton tallied eight runs to go ahead 18-16. However, Escobar Body Shop plated the three runs it needed in the bottom of the open to complete the comeback.
FM Weakend Warriors 40 (TX) finished in third place.
In the four-team Men’s 50 Major Division, top seed Texas Bulls completed an undefeated weekend, going 2-0 in the seeding games on Friday, before going 2-0 in the bracket, including a 21-16 win over Mixed Breed (TX), in the championship game.
ManCave (TX) and KC Vintage (MO) finished in a tie for third place to round out the four-team division.
The top seed in the eight-team Men’s 50 AAA Division also completed a flawless weekend, as ETX was one of three teams to go 2-0 in seeding play, before cruising in the bracket with a 3-0 record, including a walk-off thriller, 17-16, over Texas Elite in the championship game. Trailing 16-15 heading into the bottom of the open, ETX scored the two runs it needed to win the game.
K.C. Elite (MO) and Crossfire (TX) finished in a tie for third.
Romo’s Trouble (TX) defeated Manifest (TX), 21-10, in the head-to-head Men’s 50 AA Division. The game was played under protest due to a roster question and later led to Romo’s Trouble vacating the win, leaving Manifest the champion.
San Antonio Softball Club (TX) defeated RBC Wealth Management (FL), 30-25, to win the Men’s 55 Major Plus Division.
Top seed Rock N Legends 9 (TX) won the three-team Men’s 55 Major Division via its 10-8 victory over Texas Heat in the championship game. Rock N Legends 9 and Texas Heat each posted 2-0 records in seeding play. Texas Stars finished in third place.
In the six-team Men’s 55 AAA Division, top seed 55 GZ (TX) completed its unbeaten weekend with a 2-0 record in bracket play, including a 21-4 win over Buc’s (TX) in the championship game.
Relentless (TX) and Romo’s Old School (TX) tied for third place.
Houston Fire (TX) also went undefeated in the three-team Men’s 60 Major Division, going 2-0 in seeding, before winning the championship game with a 19-13 victory over Smith Mason Dudley (LA). Mayhem (OK) finished in third place.
In the five-team Men’s 60 Silver Division, Texas Legends, the lone AA team, earned the top seed in the bracket following a 2-0 record in pool play, before winning two straight in the bracket, including a 14-11 win over Texas Thunder in the championship game. 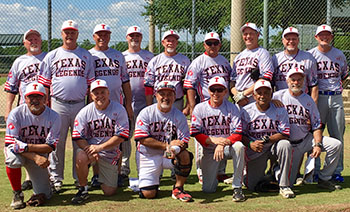 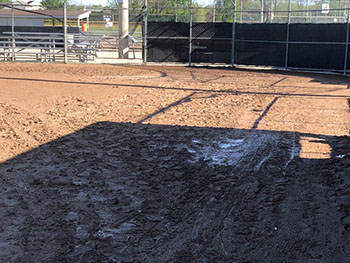 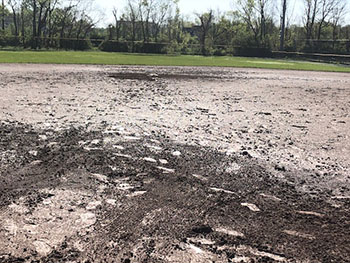