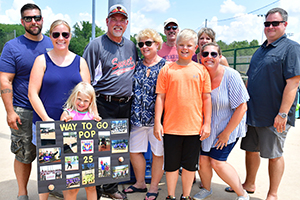 Andrew Snyder, of New Jersey, was officially inducted into the National Senior Softball Hall of Fame (NSSHOF) during the Eastern National Championships in Loudoun County, VA.

Snyder is a long-time member of Sweet Construction, playing on the 50, 55 and 60 age teams.

He began his senior softball career with Promotion Sportswear and later played with Thermco/Connecticut Sportsplex, before joining Sweet Construction.

“Andy is a team player and professional in his approach to the game,” said Mark “Boo” Canegallo, a 2009 NSSHOF inductee. “His contributions with the bat and his outstanding defense are major factors in the success of Sweet Construction.”

Gary Richter, a 2011 NSSHOF inductee, says, “Andrew is one of the best players I have ever played with and against.”