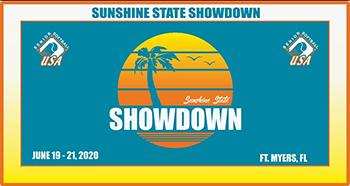 PUNTA GORDA, Fla. – The 2020 Sunshine State Showdown featured 25 teams in action here at Carmalita Park, June 19-21. The tournament was originally scheduled to take place in Ft. Myers, but a change in venue was required due to current COVID-19 restrictions in place.

The Men’s 65 and 70 age divisions kicked off the tournament on June 19.