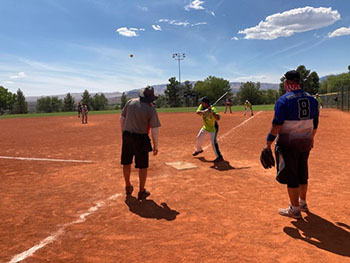 The tournament, which was set to originally take place July 28 – Aug. 2 in Sacramento, was moved to Utah due to COVID-19 restrictions still in place in the Golden State, and replaced the Spring World Championships.

The move snapped a seven-year run of the tournament being held in Sacramento/Placer counties. The last time the tournament was not held in California was in 2012, when Aurora, Colo., hosted the Western Nationals.

Battling high temperatures in the triple digits, 31 teams went on to take the first step toward the Triple Grand Slam by earning a spot in the U.S. National Championship game, which will take place during the World Masters Championships.

Highlighting the first session was Top Gun Elite (CA), who won six straight games in the elimination side of the bracket, to take home the Men’s 65 Major Championship. 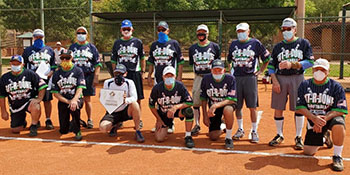 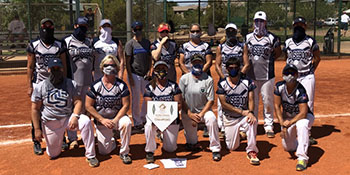 Moving to the Lone Star State, 46 teams competed in Grapevine at the Texas State Championships, Aug. 4-9.

The tournament was originally scheduled for April 28 – May 3, but was rescheduled due to the pandemic.

Champions were crowned in nine divisions.

Tournament Highlights:
Vivid/Easton (TX) won the competitive eight-team Men’s 50 Major Division, coming out of the elimination side of the bracket to double-dip ManCave (TX).

In the Men’s 65/70 Gold Division, Texas Thunder 65 avoided the dreaded double-dip to defeat San Antonio Silver Streaks 70 (TX) in the “if” game, after dropping the championship game.

The seven-team Men’s 70/75 Gold Division featured a full six-game round robin to determine the champion. USA Patriots (OK) posted a perfect 6-0 record to claim the championship.

Champions were crowned in nine divisions.

Tournament Highlights:
The six-team Men’s 55 Major Division featured a pair of thrillers in the championship and “if” games.

Coming out of the elimination side of the bracket, Larry’s Tire/Neuman Data (MI) edged out a 29-28 victory in the championship game over Aurora Tap House (IL), forcing the “if” game.

In the deciding game, Aurora Tap House returned the favor with a one-run victory of their own, 21-20.

In the Men’s 65 AA Division, Indy Fog (IN) won a hard-fought best-of-three series against Shannon Fence/CPOA (OH) that went the distance.

Finally, heading back down south to the Sunshine State, the Spring National Championships in Polk County hosted 30 teams, Aug. 14-16.

The Spring Nationals were originally scheduled for March 20-22, but was rescheduled due to the pandemic.

Champions were crowned in eight divisions.

Kryptonite Miken/Worth (FL), Women’s 40 Major, and BAGS (FL) Women’s 50 AAA, were the winners on the Women’s side.

This weekend, two qualifiers are scheduled, as the Rochester 10,000 Lakes Classic (Minnesota) and the Wayne Gilmore Memorial (Maryland), will take place.

These are the last two qualifiers scheduled before the World Masters Championships.