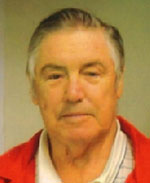 Additionally, Towne was heavily involved in the Harris County Senior Softball League for 27 years, as a player, manager and board member.

Along with playing stateside, Towne was a global ambassador for senior softball. From 1994-2015, Towne participated in 21 international tours, competing in 21 countries. He also managed seven of those international teams.

Towne spent most of his overseas tours in Japan, competing for the Japanese National Championship on eight occasions, winning three times (2000, 2001 and 2010). To go with his team accolades, Towne also collected various personal awards such as Best Offensive Player and MVP.

Towne’s last international championship victory was in 2013 at the Pacific Rim Championships in Beijing, China.

"I've played with Chuck in more countries than I can count, including for several years in Japan," said Terry Hennessy, SSUSA chief executive officer. "He not only had one of the finest softball minds, but was an exceptionally talented player.

"He was the best possible combination of skill and social grace in our international competitions," continued Hennessy. "As a result, he helped generate a love for the sport in other countries, because they were so impressed with his love and mastery of the game." 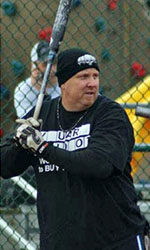 Pellegrini was in Utah playing with Washington Legends in the 20-team Men’s 50 Platinum Division at the Western National Championships. He also played with the team in 2019.

"Greg was a great friend to all ages of the softball community, from seniors to the youngsters,” said Jack Orewiler, manager of Washington Legends.  “He was always there to lend a hand to his fellow players, whether it was hitting advice, breaking in your bat, or restringing your glove.  A few powerful BP hits from Pelle would get your bat game ready in a heartbeat!" One of the best hitters in the game!  His presence and stature at the tournaments, along with his constant positive banter with opponents and teammates, will be missed for sure.”

“Greg was the most intensive personality on the field during his time,” said Jeff Colwell, teammate. “Everyone who played against Greg knew he liked to try and get into your head.  He lived for softball, for the relationships, and would help out anyone he could.”

“Greg had a passion for helping those in need,” continued Colwell. “He was known for helping friends in need, and especially known for helping those he didn't know, but he knew needed help. He had such a strong spirit and big heart. He was embraced as family by many. His passion for softball was huge and his desire to help his teammates understand the game and become better players was always a priority. Greg was very talkative during his play on the field. Many know him from his many one liners he chirped at you, whether you're a teammate or the opposing team.  He felt it his obligation to let you know!!”