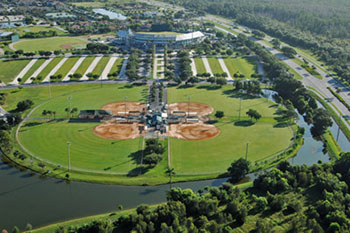 The first session, Men’s 65 – 85, held at CenturyLink Sports Complex in Ft. Myers, saw the effects of Tropical Storm Eta wash out Wednesday’s games, causing rescheduling to some modified single-elimination bracket games on Thursday. All games on Tuesday were able to be played, despite lightning delays.

In the four-team Men’s 65 Major Division, Via Citrus (FL) posted a perfect 3-0 record in bracket play, including 27-12 and 17-10 wins over top seed Slug-A-Bug (FL) in the championship and “if” games, respectively.

In the final game, Universal Softball cruised to a 24-9 victory.

Studz finished in third place with a 23-14 win over Spring Ford.

Bulls (FL) and FL Mustangs each posted a 2-0 mark in seeding to come into the bracket play as the top two seeds.

In the winner-take-all game, Bulls completed the perfect week with a thrilling 8-7 victory.

The series went the distance as the teams exchanged wins in the first two games. STL Vision took the opening game 16-8, while Chicago Gray Sox pulled through with a 15-14 win to even the series.

In the rubber-match, Chicago Gray Sox again squeaked out a one-run thriller, this time a 7-6 win, to take home the championship.

The Men’s 50 – 60 teams began play on Friday, while the 40s Division began on Saturday.

In the eight-team Men’s 50 Gold Division, Avalon Insurance (FL) ran through the gauntlet on Championship Sunday, going 5-0, including a double-dip over Silver Rays (FL); 19-18 and 23-16, in the championship and “if” games, respectively.

The Men’s 55 Major Division also featured a best of three series that would go all three games.

In the seven-team Men’s 55 AAA Division, Ohio Hitmen posted a perfect 4-0 record in bracket play, including a 23-11 win over top seed Team Illinois in the championship game.

Following an 0-2 record in seeding and dropping its first game in the bracket, Luther Group (WI) re-grouped with three straight wins in elimination games en route to its third place finish.

In the nine-team Men’s 60 Major Division, Clean Planet (MI) completed bracket play with an unblemished 4-0 record, including a thrilling 14-13 win over top seed Via Citrus/Team Florida in the championship game.

Levin/Ameriprise (FL) was the third place finisher after winning a pair of elimination games on Sunday.

Long Island Jaguars (NY) proved its worth as the top seed, going 6-0 on the weekend (2-0 in seeding and 4-0 in bracket play). The team cruised to an 18-7 win over RedHawk Nation (FL) in the championship game.

Big Daddy’s Donuts (MO) and Cincinnati 60s (OH) were the other two teams to advance to the final day of play.

Past Our Prime (VA) was the third place finisher.

CLICK HERE for game-by-game results (be sure to refresh your page).