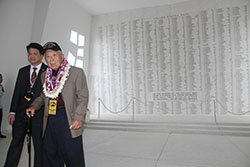 Daniel B.T. Lau visits the USS Arizona Memorial during a ceremony on 12/7/15. Photo by: Wyatt Olson/Stars and Stripes

CLICK HERE to read an article on Lau that appeared in the Star Advertiser on Nov. 10.

Lau was buried on Nov. 9 at the National Cemetery of the Pacific at Punchbowl with military honors. He received the Bronze Star for his role in the Battle of the Bulge.

Lau was stationed at Schofield Barracks on Oahu, Hawaii, at the time of the attack on Pearl Harbor. He was assigned to the 298th Hawaiian Infantry, later part of the 25th Division, and then joined the 78th Infantry “Lightning” Division in Belgium.

Lau was a graduate of the University of Hawaii. The last surviving founder of Finance Factors, Lau was a mainstay within the Honolulu financial community.

In SSUSA, Lau was a long-time member and manager of Hawaii Seniors 80s.

"I will miss seeing Mr. Lau at the manager meetings in Las Vegas," said Fran Dowell, SSUSA Executive Director. "He always was so kind and such a big supporter of Senior Softball. His smile and his heart will be missed by many."