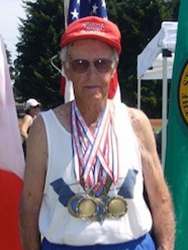 He last played SSUSA during the 2010 season with Northwest 80.

Lloyd Livernash, who played with Splaine, had this to say back in 2010: “Gil is truly amazing. He can still do it all. He can run, steal, catch, throw and hit for average, as well as power. Unlike me, he is still playing with all his original equipment and is still playing for the Northwest 80s team that I played for, at a high enough level that they still want him around.”

Along with excelling on the diamond, Splaine has also etched his name all over the Washington State Senior Games record book. His name appears 15 times across five different events in Track & Field – Softball Throw, Long Jump, Standing Long Jump, High Jump, and 50-Meter Dash – in numerous age divisions (80-84, 85-89, 90-94 and 94-99).

“Gil is really colorful,” said Rich Simmonds, Gil’s son-in-law. “He is Irish and will get in a fight if you don’t like the Catholic schools, i.e., Notre Dame, Gonzaga, etc.  He was a high tower crane operator for his career and a member of the operators union for 70 years. I believe he stopped playing at age 97, but is still a dancer and lives independently in Washington and Arizona.”