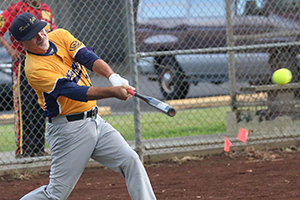 
KAILUA-KONA, Hawaii — Locals say it never rains in Kona. Well, it finally did, but only on the first day of the COVID (Mayor’s) Cup held Jan. 15-17 at the Old Airport Field in Kailua-Kona.

With the COVID-19 pandemic still surging in most states, numbers were low enough on the Big Island to allow 12 teams, who followed safe playing protocols, to finally commence tournament play.

Almost a third of the players who played in the COVID Cup had to fly into the Big Island and were subject to taking a mandatory travel pre-test. As of Feb. 1, there were no reports of any COVID cases from playing this tournament.

With so many people hesitant to fly or play softball because of COVID, the tournament committee (Bob Fitzgerald, Jeffrey Kimoto, and Dave Fukumoto) made the decision to allow one additional younger player to a team (from three to four) to round out a team’s roster—this rule was temporary.

A new team brought attention to the Men’s Mauna Kea (upper) 60s division, Team Kia’i, a fusion of players from Kauai, Maui, and the mainland, powered their way through the tournament going undefeated and winning by an average of 11 runs per game.

The team is managed by Shawn Hosaka and Bully Balocan. Gary Chaney garnered the MVP award for hitting at least one homerun every game.

"I thought our team played well enough to win, we made the plays we had to,” said Hosaka.

“We tried to keep our errors to a minimum and we did our best to answer our opponents runs with runs of our own throughout the tournament. We were also lucky that none of our guys got hurt since we were 10 strong."

Next year’s tournament, the 10th Hawaii Mayor’s Cup, will be held Jan. 17 to 21 and will have a slightly different format. There will now be a new 70s Men’s division to be held on Thursday, Jan. 20 and Friday, Jan. 21. This division will allow four younger players 68 and 69 years old.

“I wanted to protect the older players so they can enjoy playing among their own age group without worrying about getting hurt by younger, stronger players,” said Jeffrey Kimoto, tournament co-chair.

Entry fee is $550/team. More information is available at hawaiimayorscup.org