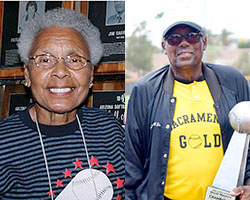 SSUSA Hall of Fame members, pitcher Billie Harris, 88, of Arizona; and manager, Norm Blackwell, 87, of California, have each left their respective marks on the game.

Harris was elected into the SSUSA Hall of Fame as part of the class of 2010.

Harris pitched a remarkable 70 no-hitters, including four perfect games, in her career.

“Billie has left an indelible mark on the sport of softball,” said Terry Hennessy, SSUSA chief executive officer, at the time of Harris’ induction. “She was the first African-American player on Arizona’s first all-women’s softball team during the ‘50s and ‘60s.”

“Billie played on the Saints women’s senior softball team for several years,” added Hennessy. “Billie represents much more than the game of softball; she provides an exceptional example of excellence in life.”

CLICK HERE to watch a feature on Billie Harris by FOX Sports Arizona.

CLICK HERE to read an article on Harris from 2018, celebrating her 85th birthday - with what else, a ball game.

Blackwell is one of the most decorated players in Sacramento history, and a manager of teams winning 90 world, national and regional titles. Blackwell’s Sacramento Gold 80s team won the Triple Grand Slam in 2016.

Blackwell was inducted into the SSUSA Hall of Fame as part of the Class of 2017.

“Norm Blackwell represents the best qualities of our sport,” Hennessy said at the time of Blackwell’s Hall of Fame induction. “He is not only an exceptional athlete, but he has provided an excellent example – and training – for ballplayers of all ages.”

Blackwell managed and played for Sacramento Gold for two decades.

Blackwell was also a 1996 Olympic torchbearer.

At 19, Blackwell was offered a contract to play semi-pro ball in 1952; which he turned down on the advice of his relatives as he would have had to play in the South.