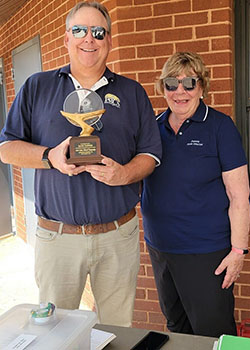 All games for session one (Men's 65 - 80) took place at the Potomack  Lakes Sportsplex in Sterling, with 21 teams in action.

Highlighting the first session of the Eastern Nationals was the induction of Ray Dye, 79, into the National Senior Softball Hall of Fame (NSSHOF). 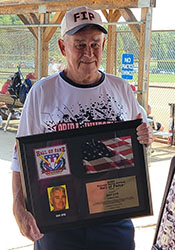 Dye, part of the NSSHOF Class of 2020, was inducted into the Pioneer Player category.

Dye has a senior softball career that spans over 18 years, where he has accumulated a number of MVP and All World honors across all the major associations. He has previously been a member of Indy Fog, Chicago Classic, Direct Employers, Bucs & Bulls, Pfeiffer Auto, Canterbury Cruisers, Boca, Monkey Joe’s Big Nut Co., Chadwell Supply and Venom among many others.

Currently, Dye is a member of Florida Investment Properties.

Beginning with the five-team Men’s 65 Major Division, Via Citrus (FL) posted a perfect 3-0 record in bracket play, including a 25-11 win over High Street Bucs (MD).

Superior Senior Softball swept the series, by scores of 19-8 and 29-9, respectively. 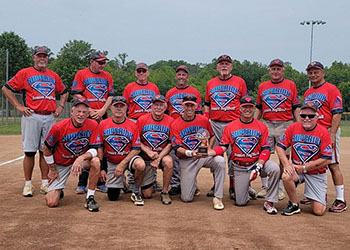 In the three-team Men’s 70 AAA Division, top seed Jersey Masters Red went unbeaten the bracket, going 2-0 with a 10-6 win over Northern Virginia Force, and a 12-8 victory over Syracuse Cyclones in the championship game. 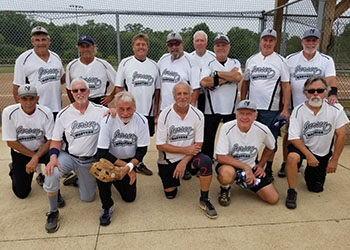 The tournament continued with the second session on July 30, with 65 teams competing in the Men's 50-60 and Women's 40-50 divisions.

Along with Potomack Lakes, Philip A. Bolen Memorial Park (Leesburg) and Brambleton Regional Park (Ashburn) were also used during the second session.

However, all three complexes would not be used for the entirety of the tournament, as rain would eventually wash away play at both Brambleton and Potomack Lakes on Saturday and Sunday.

Bolen would be the lone complex used on Sunday.

SSUSA would like send a special thank you to the grounds crew at Loudoun County Parks and Recreation for all of their hard work and dedication to helping play resume and crown champions. 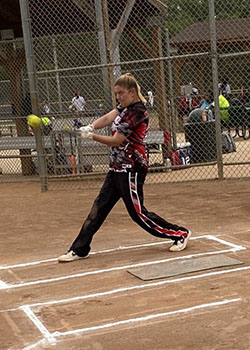 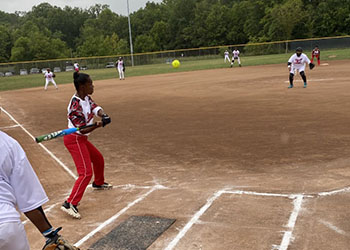 Women's Division in action at the 2021 Eastern National Championships

In the six-team Women’s 40 AAA Division, Taz/K&G Softball (OH) went 2-0 to take the top seed, and won opening bracket games, 13-10 over Lady Legends, and 15-0 over Fireballs (MA), to reach the championship game.

With the remainder of games rained out, Taz/K&G Softball was declared the champion. 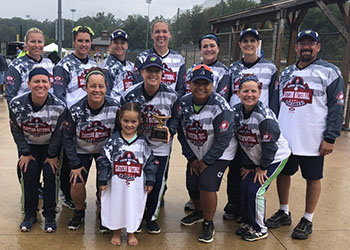 Cherry Bomb (MD) won four straight games in the elimination side of the bracket to reach the championship game.

With no other games played, Team Works was declared the champion.

Unfazed finished in second place after winning a pair of elimination games, while Dreamgirlz finished in third place.

Following its 14-8 win in the winner’s bracket final to advance to the championship game and lone remaining undefeated team in the bracket, Hard Hat Café/Latella’s (CT) would be declared champion.

With the rest of the games rained out, Freehold Buick/Juno took home the title, with High Street Bucs as the runner-up.

With the rest of the games rained out, BPA was declared champion.

The five-team Men’s 55/60 Platinum Division was able to be played in full.

Phoenix Tube/REMAX rattled off three straight wins in the elimination side of the bracket to reach the title game.

The four-team Men’s 55 AAA Division was also able to be completed in full, as top seed N.E. Merchants (MD) went 3-0 in seeding, and 3-0 in bracket play, including a 21-9 win over Infoquest.com (PA) in the championship game.

Infoquest.com posted back-to-back wins in the elimination side of the bracket to reach the championship game.

The Bank (DE) began bracket play on the wrong footing, going 0-2. However, the team bounced back with three straight wins to advance to the third-place game. The game would be rained out.

Maryland Cougars made a valiant run through the elimination side of the bracket with four straight wins to finish in fourth place.

With the rest of the games rained out, Crossfit/Great Clips was declared the champion.

Sunshine Sluggers won three straight games in the elimination side of the bracket to advance to the third-place game.