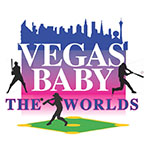 LAS VEGAS – The Senior Softball World Championships, the granddaddy of them all, continued here with the Men’s 65 through 85 age divisions playing Sept. 20-23, and the Men’s and Women’s 40 age divisions taking the field Sept. 24-26.

Six U.S. National Championship Games were held during the second session, with the West teams holding a 4-2 advantage.

Two National Senior Softball Hall of Fame inductions also were held during the second session, as Dave Dowell, SSUSA National Director/Scheduling, and Lud Nordahl, a member of Timberworks/Suncoast 70 were each inducted.

Session two began on a somber note, unfortunately, as Ron Smith, a player on Excessive Force (CA), a Men’s 65 AAA team, suffered a heart attack on the field and later died at the hospital.

SSUSA extends its deepest condolences to the Smith family.

During the third session, a pair of teams from Florida, as well as Washington, Kansas, California  and Utah all took home championships.

In the four U.S. National Games of session three, the East teams held the advantage, 3-1.

The Men’s 55 and 60 age divisions began the tournament, Sept. 16-19. CLICK HERE to read the recap from the opening session.

Directors and umpires have earned a well-deserved break, as the first three sessions totaled 488 teams with 1,590 games scheduled over 11 straight days. 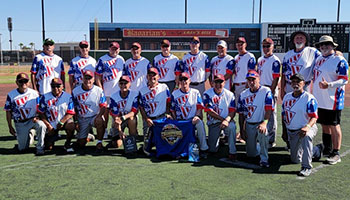 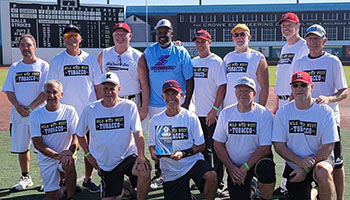 The Men’s 65/70 Major Plus Division featured five 65-year-old teams and one 70-year-old team. All games were played under 65 age division rules with 10 defensive players.

Timberworks/Suncoast continued its winning ways in the bracket, defeating MN Masters/Ancell 43-26 and McDowell & Sons/Drobena Builders (IN) 28-26 to punch its ticket into the championship game.

With McDowell & Sons/Drobena securing the championship for its respective age division (65 Major Plus), no championship game was held as agreed upon by both teams.

Timberworks/Suncoast would also go on to earn the Triple Grand Slam for the Men’s 70 Major Plus Division. 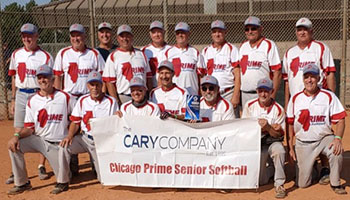 In the 25-team Men’s 65 Major Division, Via Citrus (FL) defeated Bulldogs (OR) in the U.S. National Championship Game.

Via Citrus would fall short of the Triple Grand Slam, as the team went 2-2 in bracket play, being eliminated in their first game on Championship Thursday.

Going undefeated on the week, Chicago Prime (IL) posted a perfect 7-0 record (2-0 in seeding and 5-0 in bracket play), including a 19-12 win in the Championship Game over Trachsel Auto Body (OR).

Trachsel Auto Body also entered bracket play with a 2-0 mark in seeding, and went 4-2 in the bracket, with both losses coming at the hands of Chicago Prime, en route to their runner-up finish. 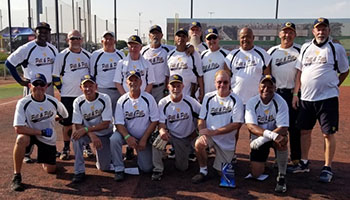 In a tournament first, a three-team full round robin was used to determine the U.S. National Champion in the 27-team Men’s 65 AAA Division, the largest division of the second session.

Yeahoos would fail to complete the Triple Grand Slam, as the team was upset in their opening bracket game against Utah Coyotes (29-17) and unable to recover. The team would eventually be eliminated on Wednesday afternoon.

Pill & Pill, the U.S. National runner-up, used a 5-0 run in the bracket, including a 16-6 win over MN Lumberjacks in the championship game.

Seattle65 (WA) ran the gauntlet through the elimination side of the bracket with five straight wins, to eventually finish in tie for fifth place along with Utah Coyotes. 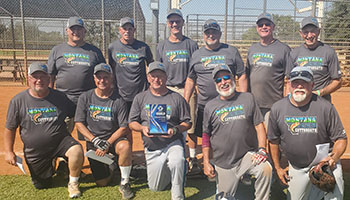 In the 14-team Men’s 65 AA Division, Montana Cutthroats took the No. 1 seed following its 2-0 record in seeding games, and continued to roll with a 4-0 mark in bracket play. The team capped off its undefeated week with 20-18 win over Relentless (TX) in the championship game.

Relentless also went 2-0 in seeding, and 4-2 in bracket play, with both losses coming against the Montana Cutthroats.

Oklahoma Street Outlaws put forth a valiant effort in the elimination side of the bracket with five straight wins, en route to their third-place finish. 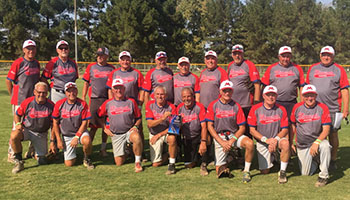 After going 2-0 in seeding to lock up the No. 1, AZ Ancient posted a 3-2 record in bracket, with both losses against champion Minnesota Masters. 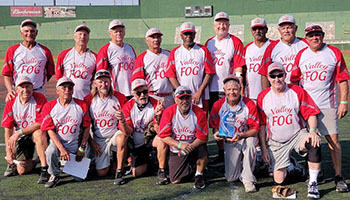 Both of SoCal Gusto’s losses in the tournament came against Valley Fog.

For Valley Fog, this is the team’s second straight World Championship title, as the team won the Men’s 70 AA Division in 2020. 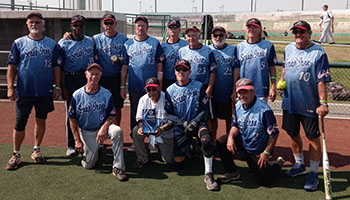 In the eight-team Men’s 70 AA Division, Scrap Iron Diamonds (CO) took home the division following a 4-0 record in bracket play, including a 22-14 win over Chicago Hitmen (IL) in the championship game. 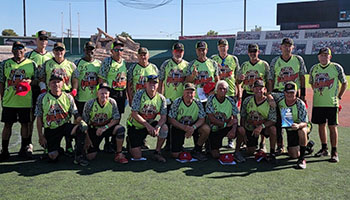 In the Men’s 75 Major Plus Division, Venom (FL) and OMEN (CA) played in a best of three-game series.

In the opening game, which was the U.S. National Championship Game, OMEN knocked off Venom, 21-5.

However, Venom would have the last word, as the team bounced back with two straight wins, 17-2 and 19-8, respectively, to complete the double-dip and claim the World title.

The loss would be the lone lose for AMR South, as the team went 6-1, to take the top spot. 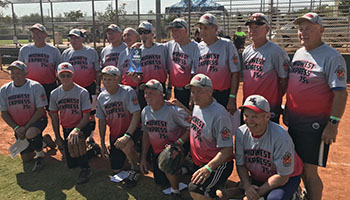 A modified single elimination bracket was used to crown the champion in the 10-team Men’s 75 AAA Division.

Midwest Express (IA) and Chicago Gray Sox (IL) each entered the bracket with a 3-0 record in seeding.

Midwest Express would go on to run the table in the bracket, with a 3-0 record, including a 10-8 win over Huberd Shoe Grease (AZ) in the championship game. 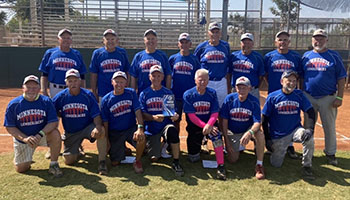 In the four-team Men’s 75 AA Division, top seed MN Lumberjacks completed an undefeated week, going 3-0 in seeding, and 3-0 in bracket play, including a 19-4 win over Triple Play (CA) in the championship game. 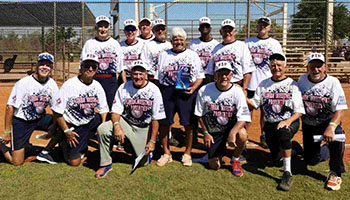 Florida Investment Properties swept Top Gun Gold (CA) in a best of three game series, by scores of 18-11 and 19-14, respectively, to capture the Men’s 80 Major Plus Division.

Men’s 80 Major (6 Teams)
A full five-game round robin was used to determine the champion in the six-team Men’s 80 Major Division.

With a 4-1 record, LOTA Softball (TX) took the top prize.

New York Statesmen, the fourth-place finisher, took home the U.S. National Championship, via its 10-8 win over Git-R-Done Gold (OR). 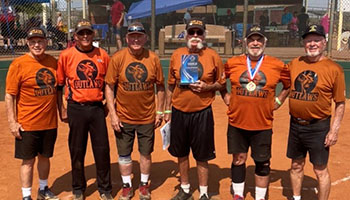 The eight-team Men’s 80 AAA Division also used a full round robin to determine the champion, with teams playing seven games.

Gold Rush was the fourth-place finisher with a 3-4 record.

Top seed Top Gun Blue Angels (CA) completed a perfect week, going 4-0 in seeding and 2-0 in bracket play, including a 17-11 win over Center For Sight (FL). 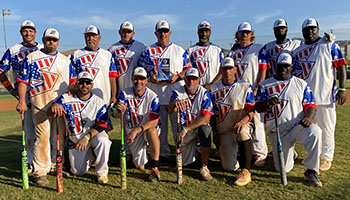 Suncoast Adidas (FL) took the top spot following its 5-0 performance in the bracket, including a 34-24 win over Proton (AZ) in the championship game. 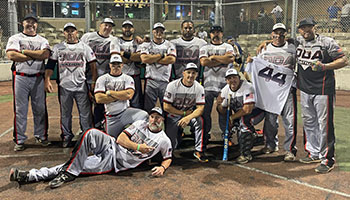 In the 65-team Men’s 40 Major Division, the largest division of the third session, DDA Nation (FL) took down Hustle (CA) 16-13 in the U.S. National Championship Game.

Building off of the momentum of their U.S. National Championship, DDA Nation, one of the four teams to reach the championship side of the bracket, would advance all the way to the Championship game.

Dudley Lightning (MO), Evan Williams/CWI (CA) and First Capital (NY) rounded out the other four teams that entered the final day needing to lose twice to get bounced.

Asylum Ballers (CA) was the fourth-place finisher after winning their three straight elimination games on Sunday.

First Capital finished in third place, after going 1-2 on Sunday.

After dropping their first game of bracket play on Sunday 25-2 to DDA Nation, Dudley Lightning rattled off four straight wins, including a 29-26 victory in a revenge game over DDA Nation in the championship game.

In the winner-take-all “if” game, and rubber match, DDA Nation avoided the double-dip with a 23-20 win. 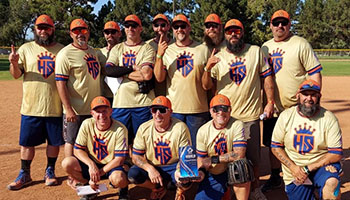 Autism Pride would be unable to complete the Triple Grand Slam, going 2-2 in bracket play, being eliminated on Sunday morning.

Hit N Solos: LC Merchants (WA) completed a perfect weekend, going 2-0 in seeding play, and 5-0 in bracket play, including a 25-13 win over Shut-D (HI) in the championship game.

Rough Ryders made a valiant run through the elimination side of the bracket with six straight wins. 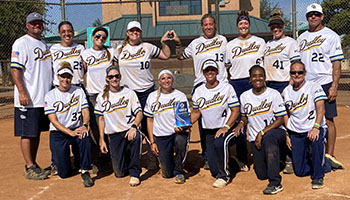 In the 15-team Women’s 40 Major Division, Dudley Softball (KS) ran the table in the bracket with a 5-0 mark, including a 16-8 win over top seed TABU (CA) in the championship game. 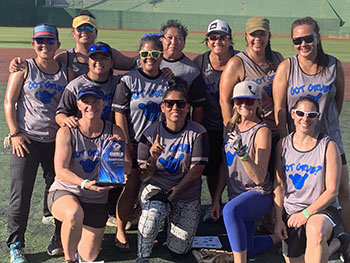 Still Grubbing continued their winning ways in the bracket, going 5-0, including a 19-12 win over Shut-D XP (HI) in the championship game, to complete the Triple Grand Slam. 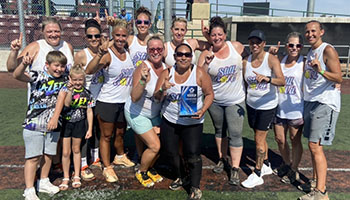 In the three-team Women’s 40 AA Division, top seed Still Got It (UT) went 2-0 in the bracket, including an 8-6 win over Guam FIGO Islanders in the championship game.