A Ball Player For Life 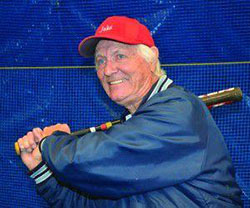 With the upcoming 2022 season on the horizon, John Carlson, 87, of Minneapolis, will have played an incredible 70 straight years of softball – beginning with fast-pitch and then moving on to slow-pitch.

Carlson never missed out on playing softball, even while serving in the Army.

In SSUSA, Carlson last played with Jimmy’s MN Legends 80 in 2017. He’s also previously played with Minnesota Legends 75, and Scan Air Filter 70, among others.

Carlson currently plays in the West Metro Senior League in the summer; and in the winter months, he moves indoors for games at the Academy of Holy Angels StarDome in Richfield, MN.

For his efforts, Carlson was inducted into the Minnesota Sports Federation Softball Hall of Fame in 2014.

“My plan is to play at least until I am 90,” said Carlson. “Part of the enjoyment I get from playing is the camaraderie. To all of you younger players, keep playing!”