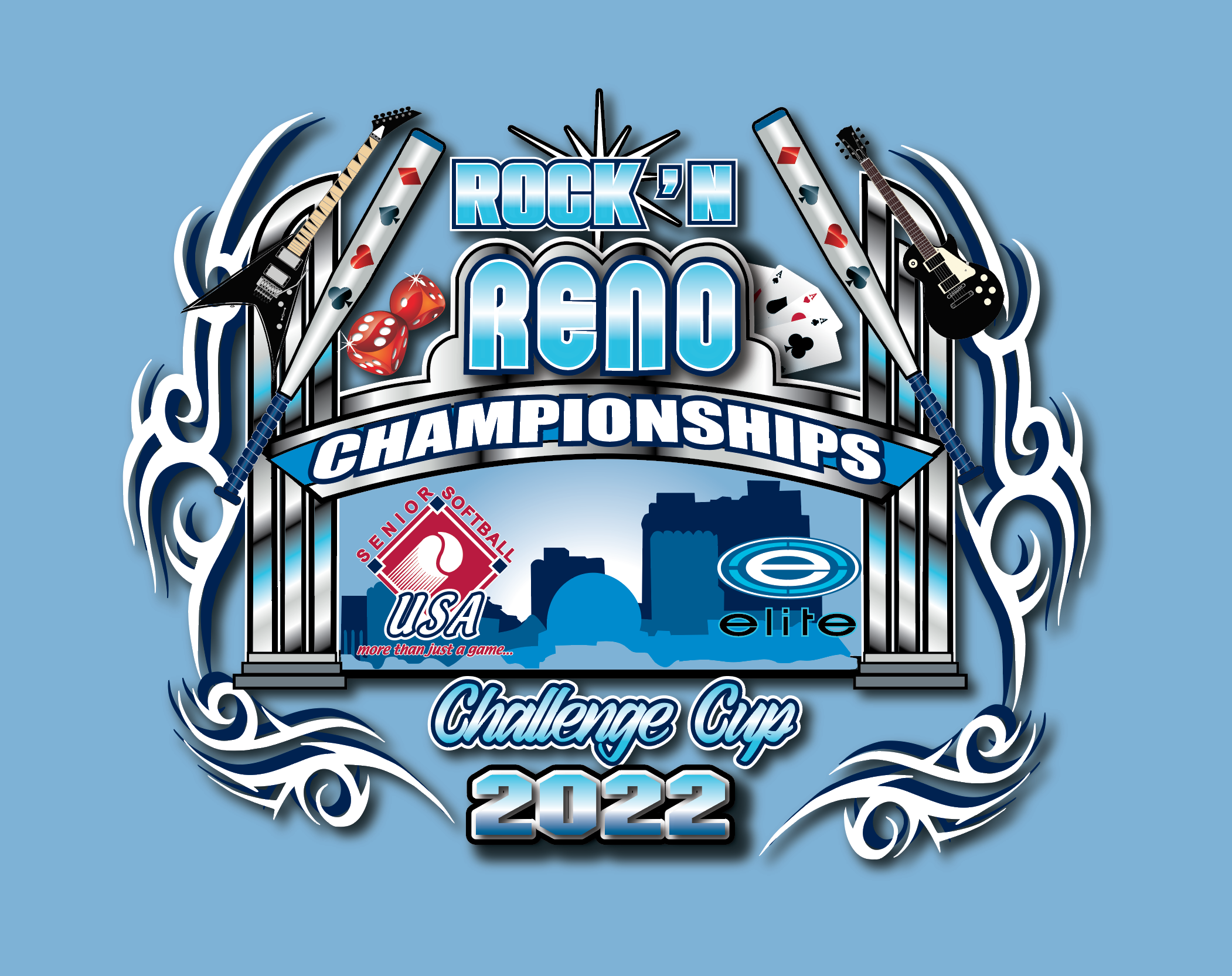 Thirty teams captured berths to the 2023 Tournament of Champions by winning their divisions in the 2022 Rock ’N Reno Challenge Cup played May 27 through June 5 in Nevada.

And while all champions forged unforgettable memories, the event carried special significance for the top-finishing men’s 50+ Major team, Shakas (photo below) from the San Francisco Bay Area. 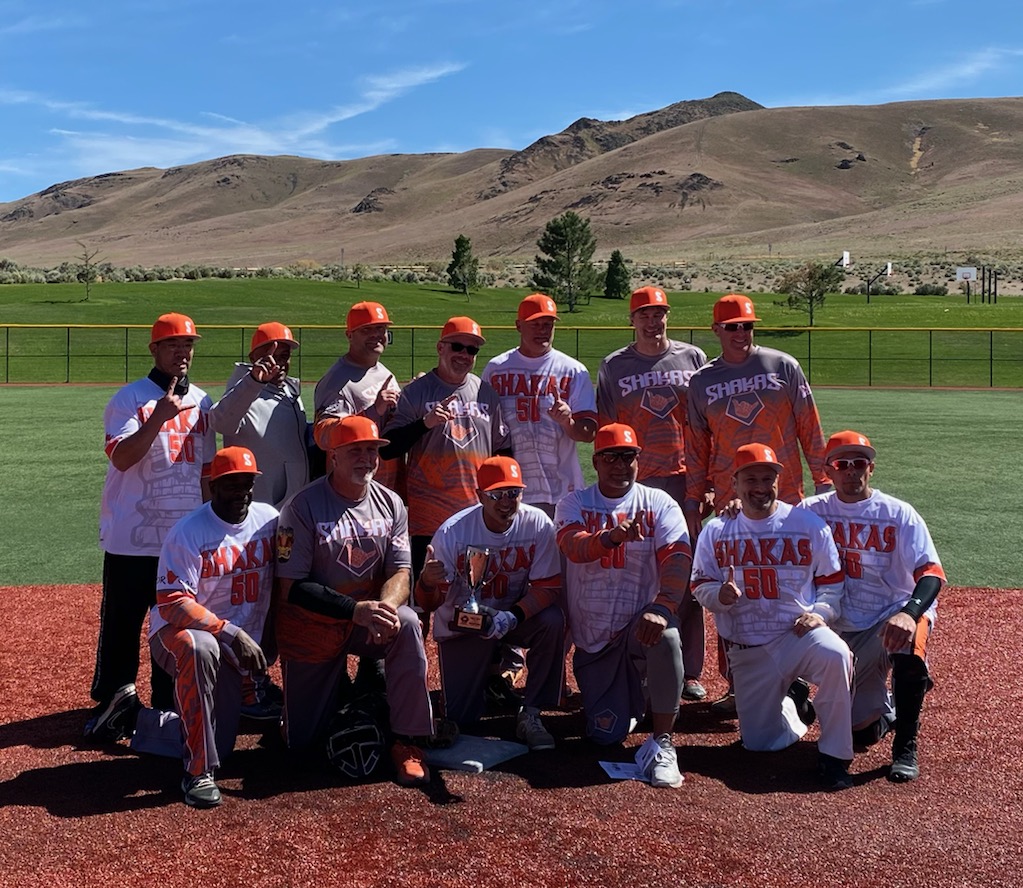 Shakas live-streamed its games so that teammate Howard “Jimbo” Ritchie could watch back home as he continued to rehab from a serious stroke. Ritchie, who put the 2022 team together, is unlikely to play again, said co-manager Manny Gutierrez. The team has dedicated this season to him.

“This was probably the biggest tournament we wanted to win for him,” Gutierrez said. “And he wanted us to win because of the competition.”

Shakas, which began playing SSUSA tournaments 15 years ago as a 40s team, entered bracket play seeded sixth of 10 teams. It survived thrilling 32-31 and 20-19 contests before earning a 28-16 title-game victory over Junkies/Onyx/NVS Sports Apparel of California.

After returning home, Gutierrez and two teammates delivered the tournament trophy and Rock ’N Reno shirt to Ritchie (pictured below), who recently transferred to a Santa Clara rehabilitation center. 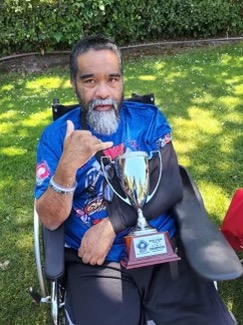 “That is when the emotions came out,” Gutierrez said.

The 50+ Major division’s runner-up, Junkies, built its own share of memories by winning six elimination games to reach the championship. Gold Nation of California finished third in the division.

In the men’s 40+ Major division, Supreme Athletics reigned supreme. The California team won each of its seven games by at least six runs and capped the tournament with a 22-6 title victory over another California team, HMR/DS Construction. Project 57 from Idaho won seven elimination games – three by one run – to finish third.

Another unbeaten team won the men’s five-team 40+ AAA division. Sicarios went 5-0 and defeated HBM 25-21 in the title tilt. Both are California teams, as was third-place finisher Game Over. 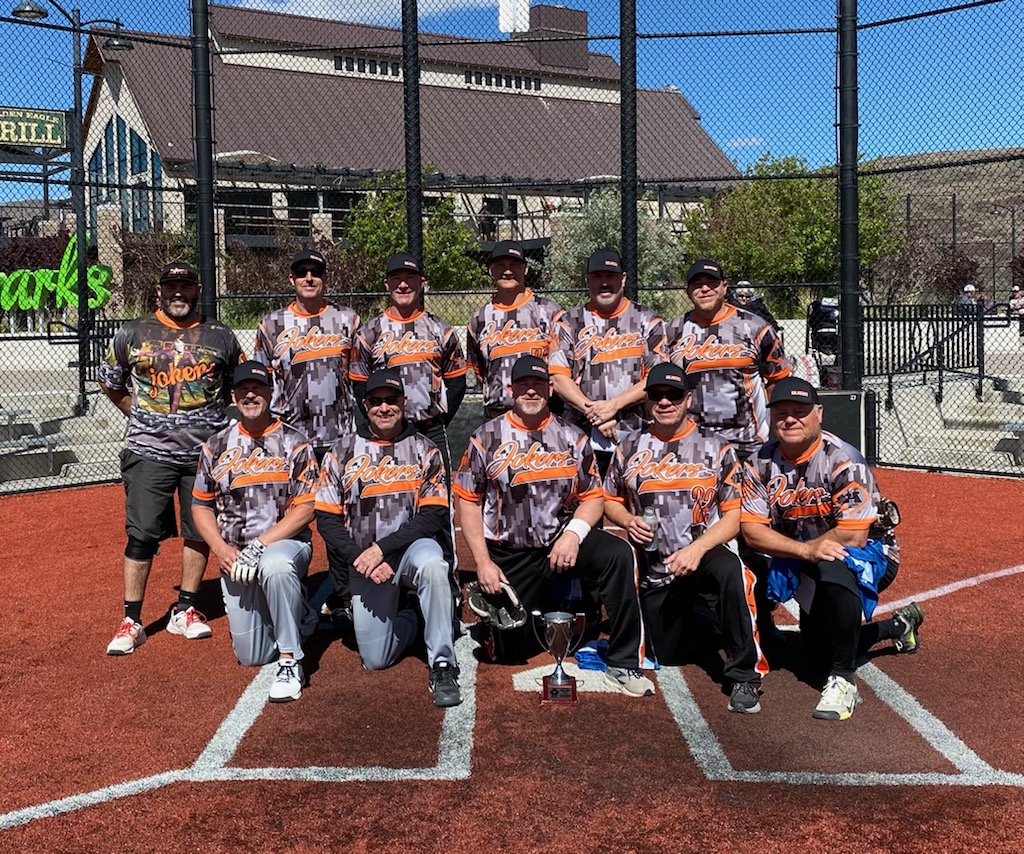 In the three-team men’s 55+ Major Plus division, the Texas team Rock N Legends 9 (photo below) double-dipped Assured Products Group of California 22-16 and 23-15 for the title. Aftershock 55 of California finished third. 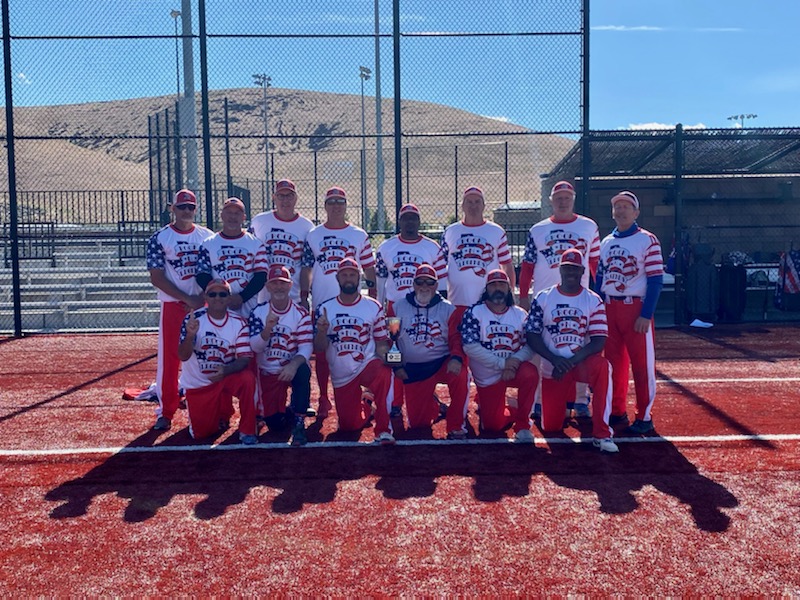 WPI/Jayco of Idaho (photo below) tallied 40 runs in each of its first two bracket games and went on to win the eight-team men’s 55+ Major division. It defeated the Wolfpack/Washington Legends 16-4 in the championship game after edging Wolfpack by one run in an earlier bracket game. BTI of California won four elimination games before finishing third. 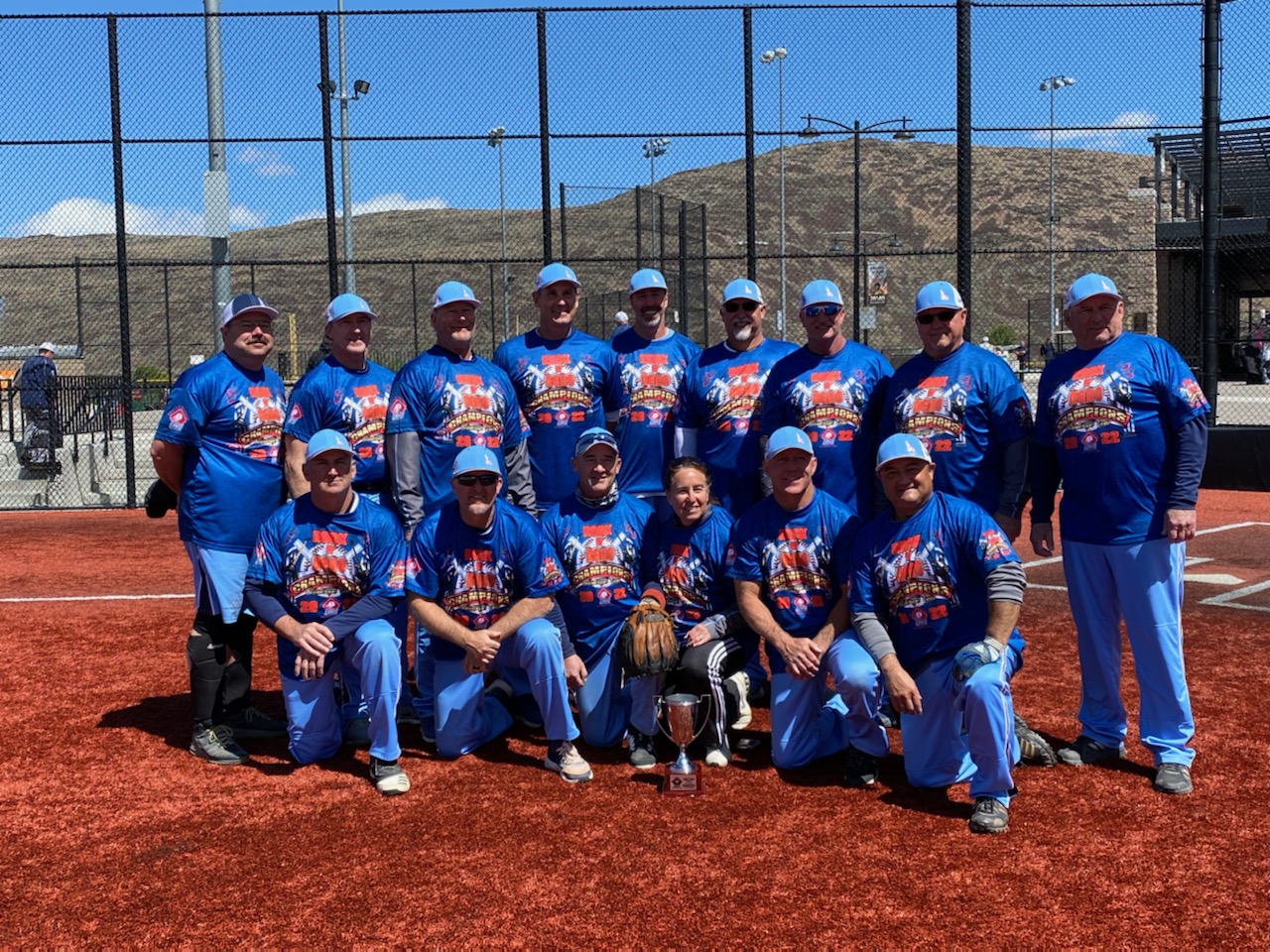 Ten teams competed in the men’s 55+ AAA division won by CaliGold (photo below), which double-dipped the Desperados NMU of California 29-26 and 20-5 after losing to them 20-7 earlier in the bracket. Quicksilver of California finished third. 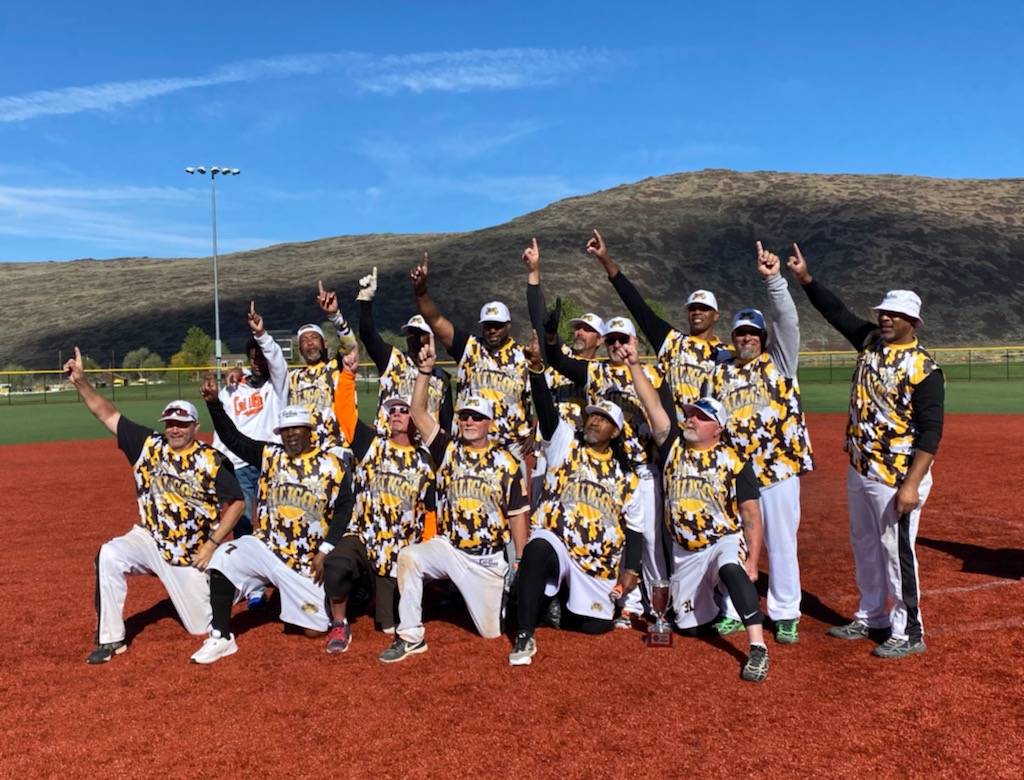 Arizona teams won the men’s 60+ Major Plus and Major divisions. In the three-team Major Pus division, top-seeded Legacy Sports USA defeated LPC of California 25-14 for the title. CornerStone of Oregon took third. The eight-team Major division title went to Arizona Old School, which lost the first championship game 35-34. The Washington Legends, which had played five games in a row at that point, forfeited the second title game. Old Giants from California took third.

In the 16-team men’s 60+ AAA division, Wilson Motors 60s of Idaho completed a 7-0 tournament with a 25-11 championship victory over Top Gun Lightning. Wilson Motors had nudged Top Gun by one run in pool play before winning four of its five bracket games by double-digits. Chelu of Oregon took third.

The 60+ AA teams played a best-of-three format, with Tri-City Legend/Time of Washington defeating the Idaho Merchants 19-14 and 21-13.

Demolition of California (photo below) crushed Texas Crush Sixty Fives 21-9 to win the four-team 65/70+ Major Plus division after nudging Crush by one run in earlier play. The 70+ Timberworks/Suncoast team finished third. 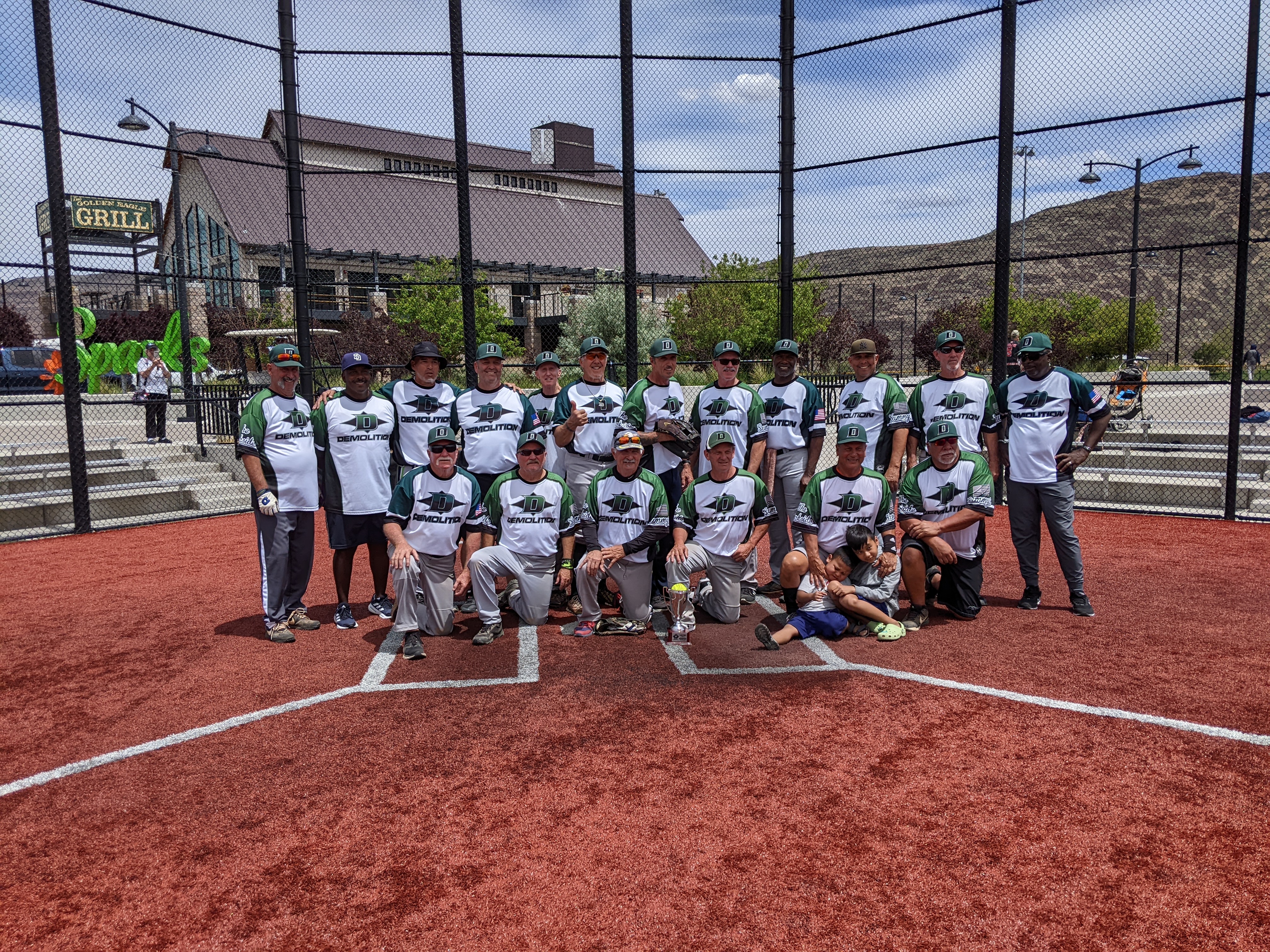 The Nor-Cal Reds (photo below) went unbeaten in six games to win the four-team 65+ Major division. The Reds defeated the Oregon Crabs 12-6 in the finale. REH Second Wind of Washington placed third. 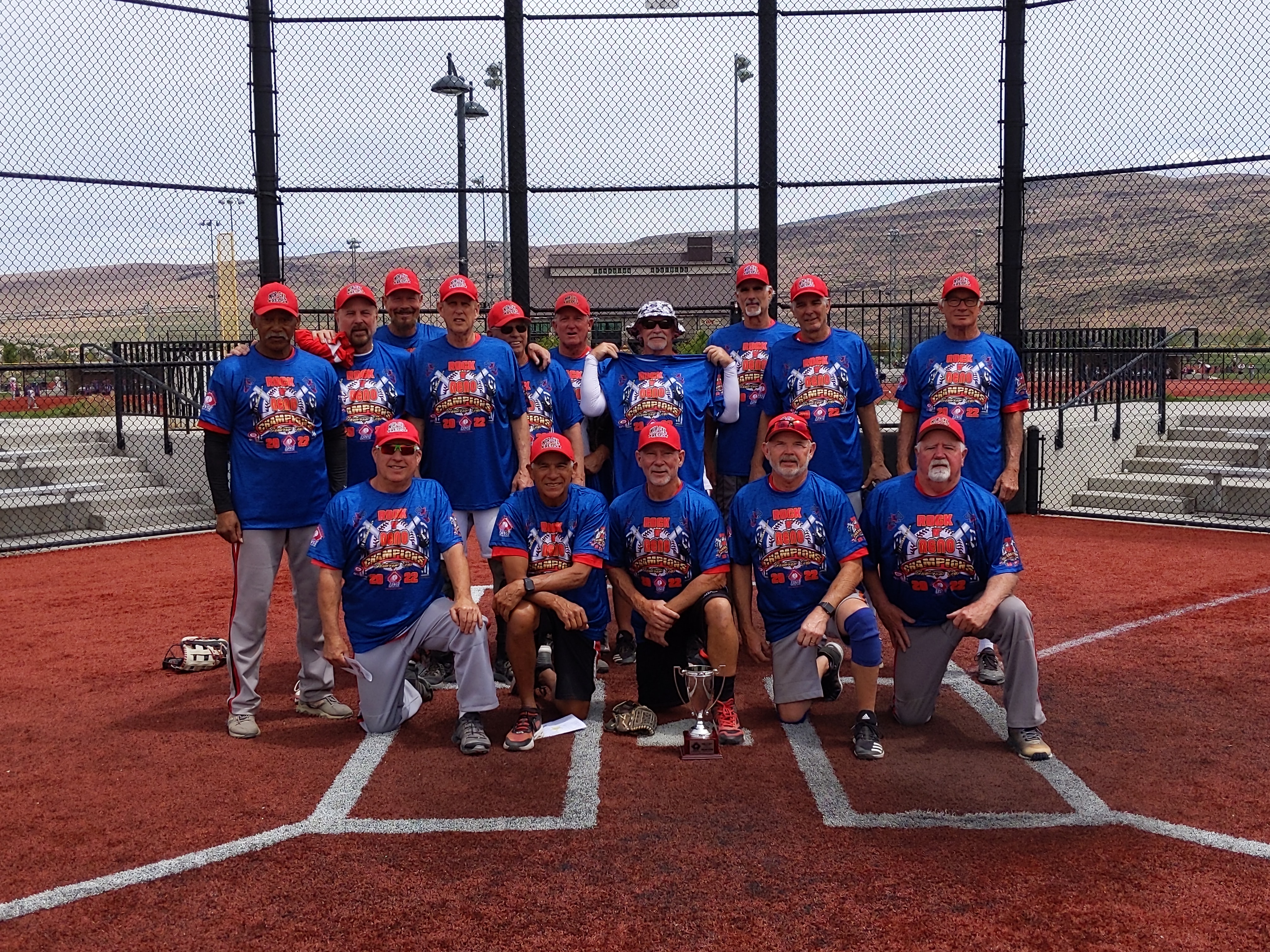 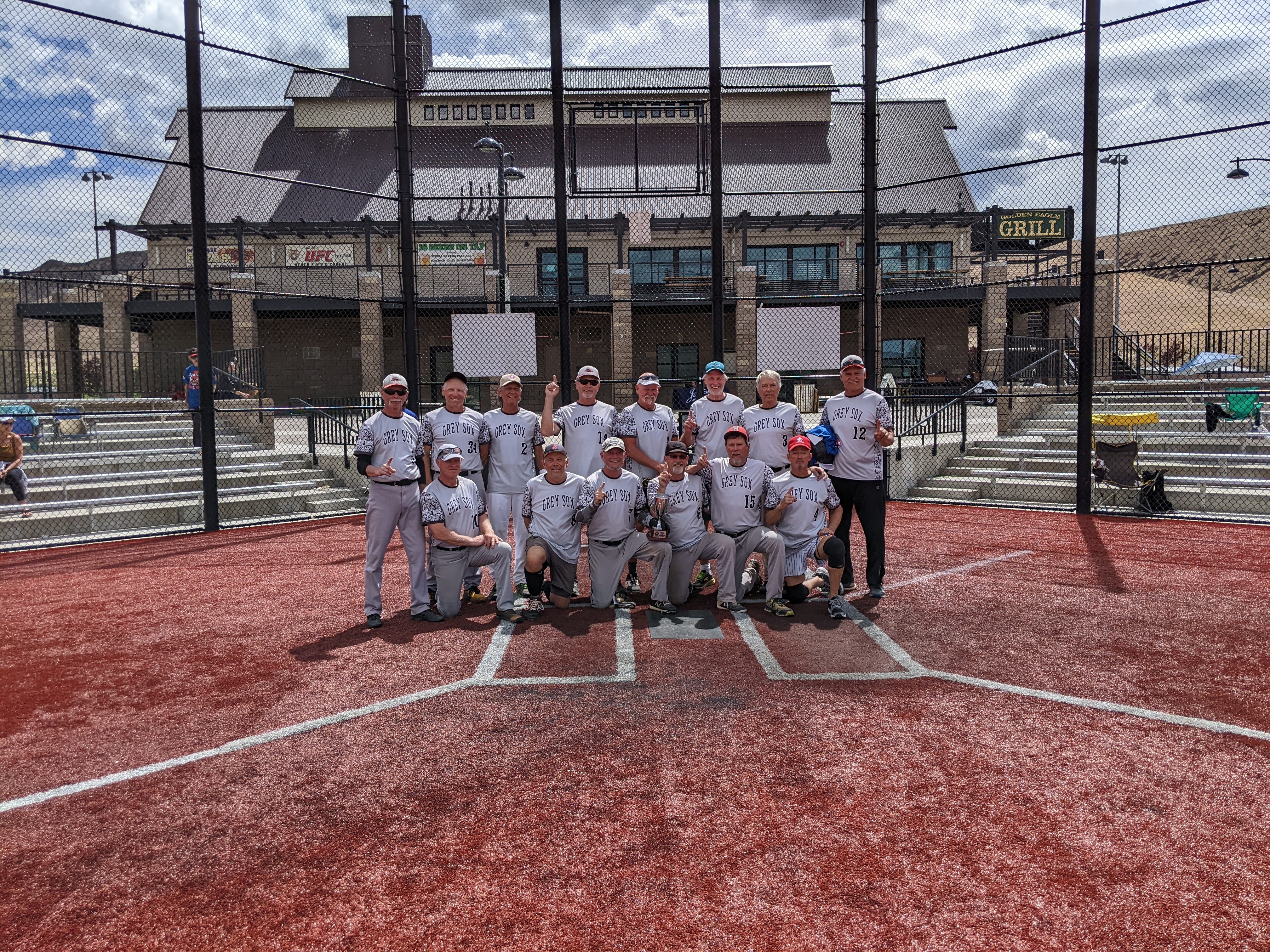 The Oregon Crabs (photo below) knocked off the Codgers 70s of Idaho 22-21 to win the six-team 70+ Major title with an unbeaten record. Animals of California finished third. 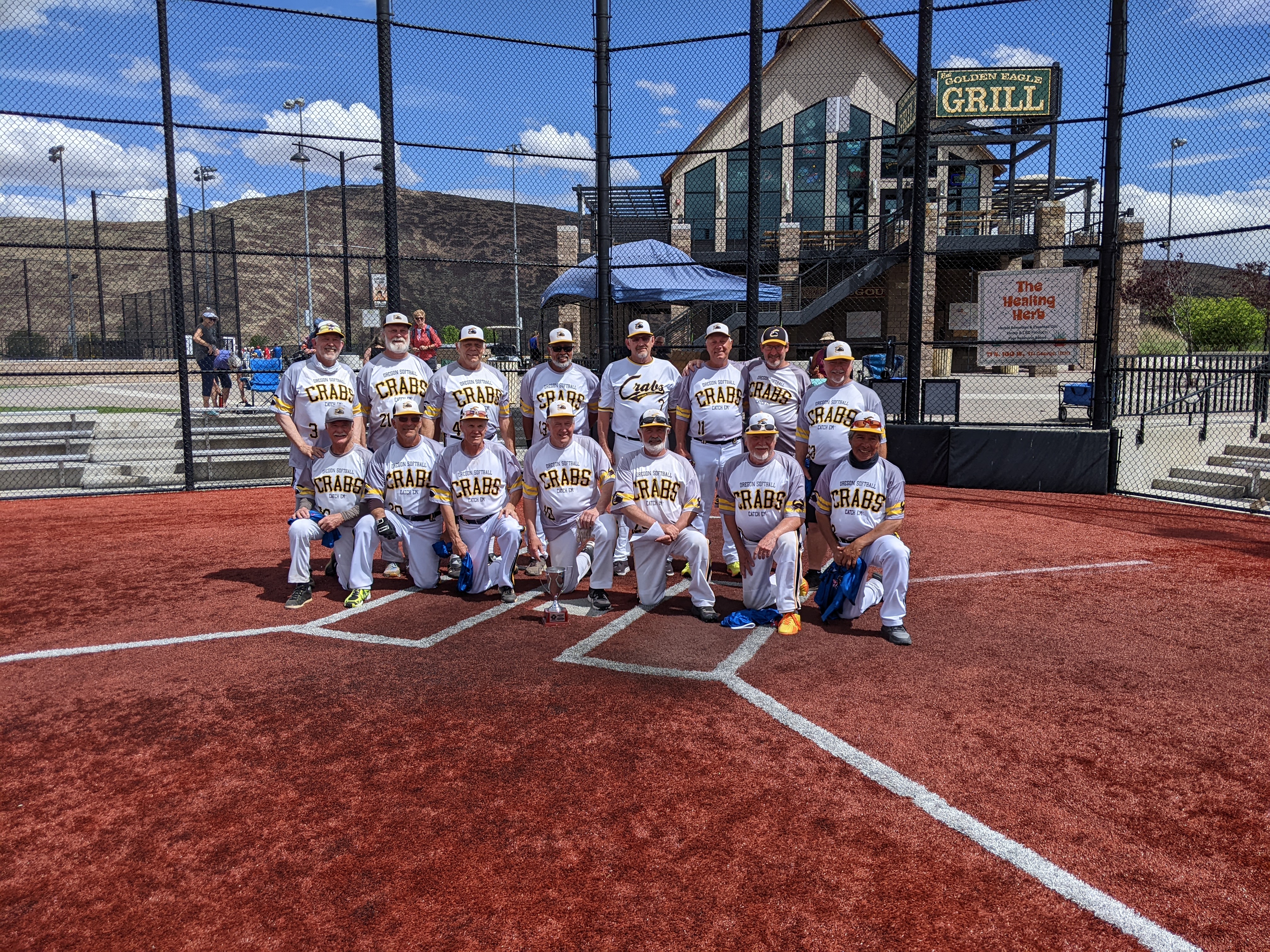 A Utah team – Ryan’s Way (photo below) – won the 11-team 70+ AAA championship by coming out of the elimination bracket, playing five games the final day, and double-dipping Last Call 70s of Nevada 19-16 and 16-12 for the title. The Lincoln Hills Coyotes 70s of California took third. 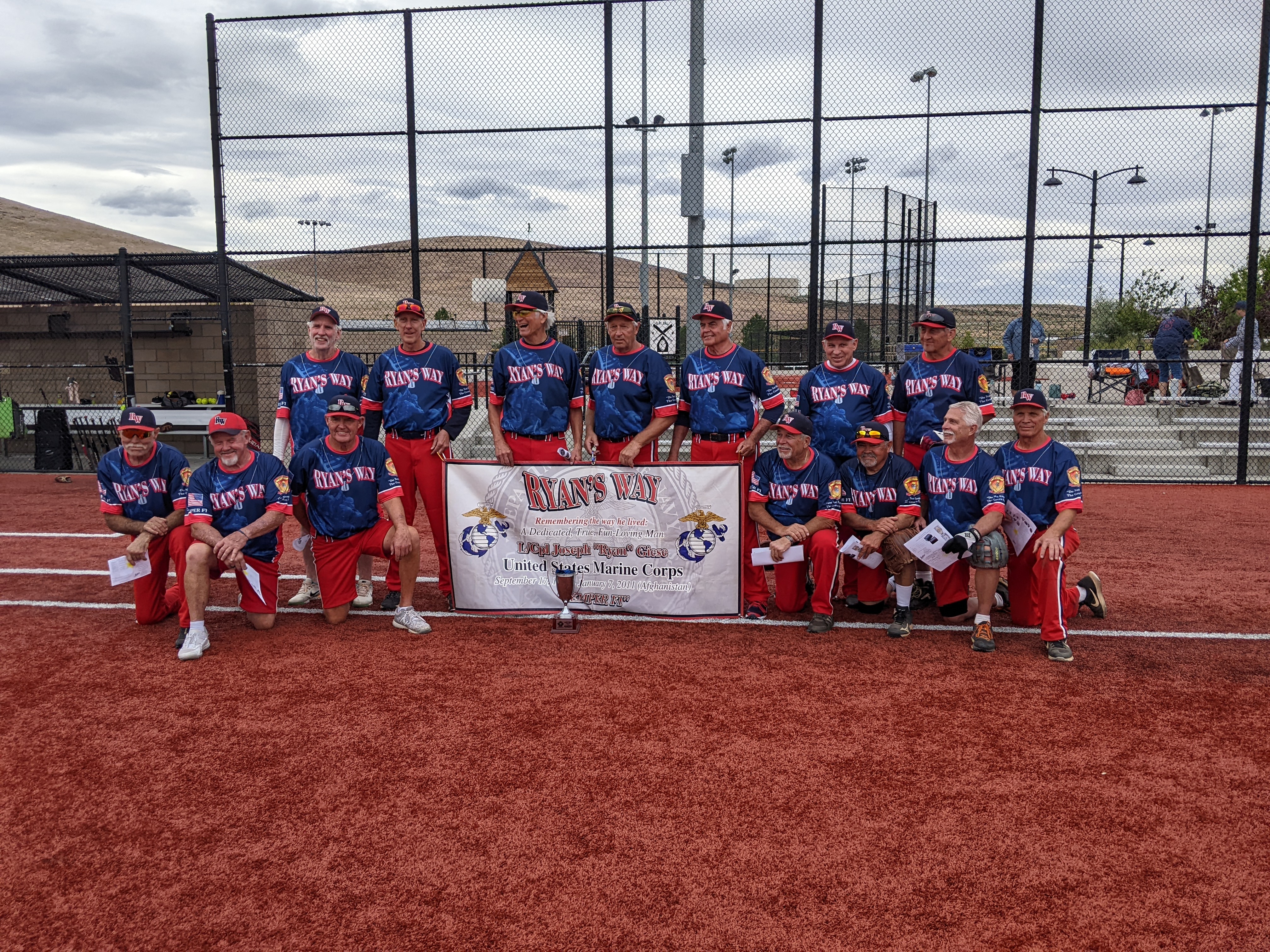 A best-of-three format also settled the 75+ AA bracket won by Triple Play of California, which defeated the California Oaks 10-7 and 19-12.

Eight teams in the 75+ AAA division played a five-game round robin to set up one final game apiece, with the top two seeds playing for the title. Maverick Construction of Texas defeated Last Call 75s 21-3 in that game. Al’s Sport Shop of California took third by defeating Mr. Plywood of Oregon 19-4.

The five-team 75+/80+ Platinum division crowned two champions. Omen 75 (photo below) earned the 75+ Major Plus title by defeating Sidewinders 75s of Arizona 18-14 for the overall title. That meant Sidewinders won the 75+ Major crown by finishing as the top Major team. Valley Fog of California took third overall. 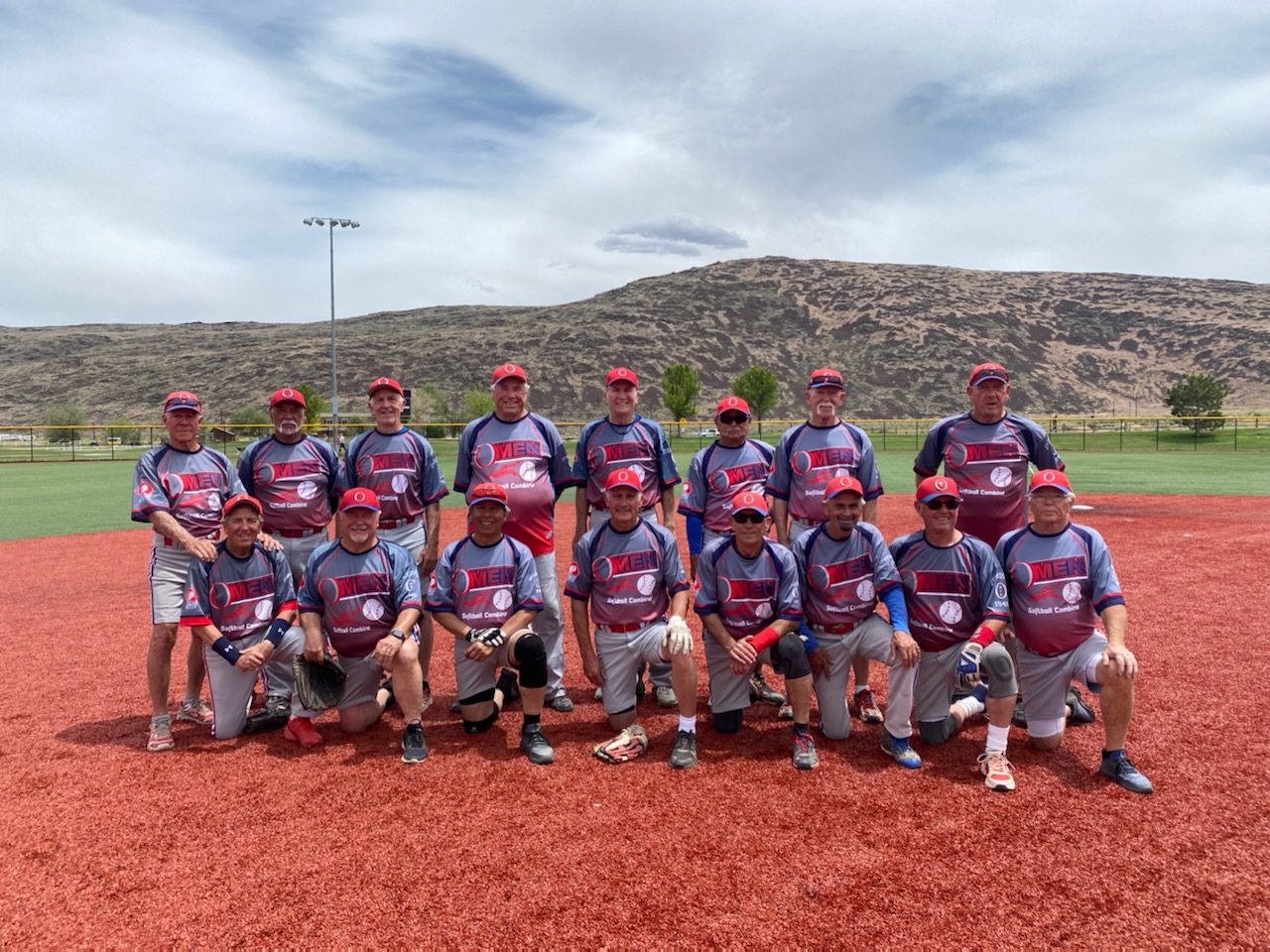 The five teams in the 80+ AAA bracket played a full round robin to determine a champion. The Lincoln Hills Coyotes 80s of California swept the competition to win with a 4-0 record. Gold Rush of California finished second at 3-1. Third went to the 2-2 Balance of Nature 80s team from Utah.

In the 80+ Major division, General Equipment of Oregon defeated the Scrap Iron Gray Berets 8-6 and 7-2 in a best-of-three format.

In the 85+ Major division, the Top Gun Blue Angels (photo below) defeated the Jaguars of California 22-7 and 19-1 in another best-of-three format. 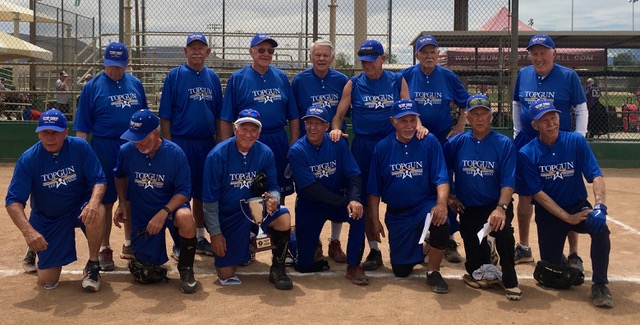 The women’s teams divided into four divisions, two of them for 40s Masters teams.

Nine teams battled in the largest women’s division, the nine-team 40+ Silver bracket won by the Firestarter Oldies of Washington. The Firestarter Oldies averaged 23 runs a game in bracket play and finished with a 17-9 victory over B.O.O.B.s 40s of California. Not Today of Nevada won three elimination games before finishing third.