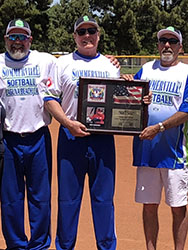 Dave “Mango” Meggison, 64, of California, was officially inducted into the National Senior Softball Hall of Fame (NSSHOF) during the 2019 LVSSA/SSUSA Southwest Championships.

Meggison began his Senior Softball career in 2005 with the Seacrest Mavericks, and has racked up 10 All-Tournament selections throughout the various senior softball organizations including SSUSA, LVSSA, SPA, ISSA, and NASCS.

Along with the Mavericks, Meggison has also played with Road Dogs, Kellys Sports, Summy’s, Nighthawks, and Sommerville Softball, which he also manages.

Hall of Famer Ron Parnell introduced Mango, saying “Mango is one of the best hitters on a team loaded with good hitters … he can hit for power or base hit depending on the situation of the game.”

And Sponsor Dave Somerville said, “I’ve known Dave Meggison for over 35 years and he is a natural leader who makes other players around him better.”