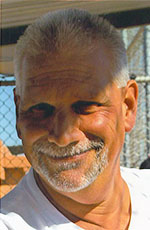 Canegallo was inducted into the National Senior Softball Hall of Fame as part of the Class of 2009 in the Player Category.

Here’s an excerpt from Canegallo’s Hall of Fame induction:
Affectionately called "Boo" (short for Buddha), Mark Canegallo is one of senior softball's most prolific home run hitters. Boo not only hits many home runs, he hits some of the longest home runs in senior softball, an accomplishment that creates a sense of awe among opponents all over the country. A main cog in the success of his teams, at 6' 4" and 270 pounds, Boo presents a formidable presence and plays as large as his physical dimensions. His true value is his intensity and a desire to win that, more often than not, results in victory.

In SSUSA, Canegallo was a long-time member of Connecticut SportsPlex, last playing in 2013.

He earned All-Tournament honors at the 2012 LVSSA/SSUSA World Masters Championships, where Connecticut SportsPlex won the U.S. National Championship Game, while finishing runner-up in the eight-team Men’s 55 Major Plus Division.

While playing in SPA, Canegallo earned Best Defense and All-American honors in 2006 and 2008, respectively. He was also listed as a 2012 SPA Impact Player.

In his younger days, Canegallo helped lead his team, Pierce Construction, to victory at the 1991 USSSA Class B World Series, earning MVP honors.

CLICK HERE to read an article from 2011, celebrating the 20 year anniversary.