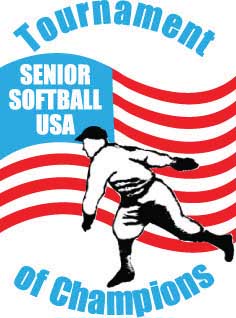 Teams had to win qualifying tournaments to be invited, which meant that all 103 entrants were champions before arriving. But only one team per division finished as the senior softball’s newest champs and winners of free, high-quality championship rings.

In addition to games, players participated in hitting clinics, an all-star contest and skills competitions. A January surge in pandemic cases caused cancelations of the Thursday night banquet and Saturday night Louisville Slugger Warriors game against the TOC All-Star winners.

In the Women’s 50+ Major division, Kryptonite from Florida won four of the five games it played while posting an average victory margin of nine runs. It defeated Unfazed, a Virginia team, 24-13 in the title game. Unfazed edged Team Works of Virginia 7-6 to advance to the championship.

Lew’s Crew/Exceeding Expectations of Maryland defeated Old Nasty Curves of California 13-3 and 17-14 in a best-two-out-of-three bracket in the Women’s 50+ AAA division.

In men’s competition, Suncoast/Adidas/Shades 50s of Florida won the combined four-team 40+ AAA/50+ Major Plus division with an undefeated run through pool and bracket play. Autism Pride captured the 40+ AAA division crown by beating out the other 40+ AAA teams. It capped its weekend with an exciting 17-16 victory over Hit N Solos of Washington before choosing not to take on Suncoast in the title game because it lacked enough healthy players.

The men’s 50/55+ Platinum division showcased seven teams from seven states. Ancel/GV from Minnesota captured the title with a 21-12 victory over Elevated 50 from Utah. After entering bracket play as the fifth seed, Ancel/GV notched three narrow victories -- by two runs, one run, and one run -- to reach the title game. Those games included a 20-19 triumph in the winner’s bracket finals against Elevated 50, which then rebounded to win the third-place game 21-18 over S&S Exteriors from Kansas.

Eight teams battled in a competitive 50+ AAA division that saw six teams finish 1-1 through pool play. Chi-Town Ballers, which entered backet play as the second seed, notched victories of 21-6, 17-16 and 20-5 before defeating top-seeded Crawford Contracting of Michigan 16-14 in the championship game. Crawford’s only two tournament losses were to Chi-Town. The Originals from Texas finished third.

Gaum Seniors 50 (photo below), which traveled the farthest to compete, dominated the men’s 50+ AA division, winning four games by an average score of 21-7. (Gaum’s only loss came in pool play against a 55+ AA team.) In the title game, Gaum defeated Team LBK of Texas 20-4. Team LBK had defeated Manifest 50, another Texas team, 9-8 to advance to the championship. 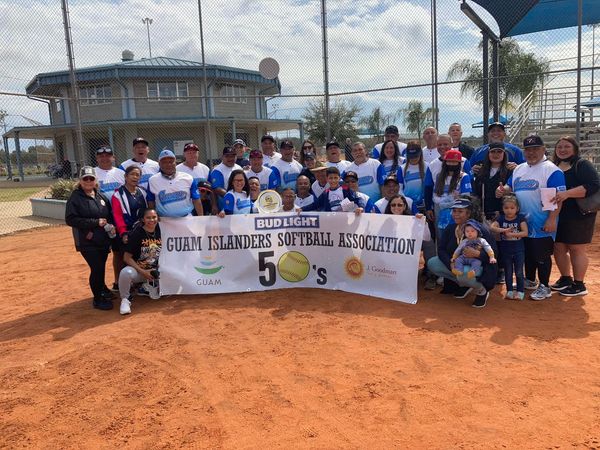 Rock N Legends of Texas (photo left), a 55+ Major team, also enjoyed an undefeated tournament but needed victories in some close games to do so. It battled Phoenix Tube/REMAX of Florida three times, starting with a 15-14 classic in pool play. Rock N Legends narrowly won again, 17-16, in the finals of the winner’s bracket. That pushed Phoenix Tube/REMAX into the elimination bracket, where it knocked off Homer Lover of Ontario, Canada, 16-14 to earn another shot at Rock N Legends. This time, Rock N Legends pulled away to win 16-9.

In the 10-team 55+ AAA division, Team Illinois lost its first pool game, entered bracket play as the fifth seed and then survived a 15-14 nail bitter over The Winter Haven All-Stars of Florida. That launched an undefeated run for Team Illinois all the way through the title game, which it won 19-16 over Crawfords 55 of Michigan. Finance of America 55 from New Jersey took third. 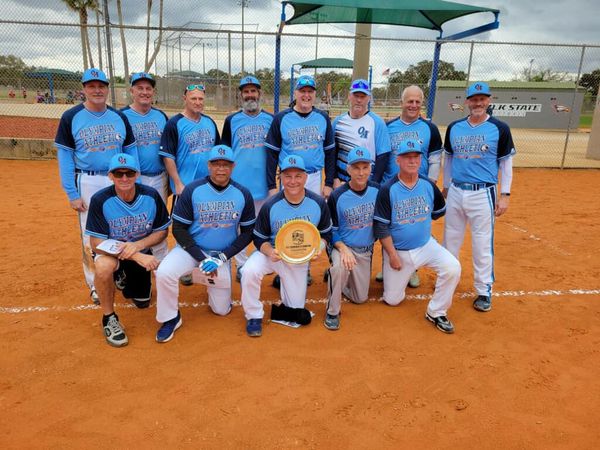 The 60+ AAA division featured the tournament’s largest bracket with 12 teams. Only three survived pool play undefeated, and two of them ended up meeting in the championship game: The Chicago Panthers and The Ockers Co. of Massachusetts. As it turned out, the only losses those two teams suffered were to each other. They met first in the finals of the winner’s bracket, where the Panthers prevailed 14-12. To earn a rematch, Ockers defeated Texas Thunder 21-20 in the third-place game. In the first championship game, Ockers notched a 15-13 victory. That set up the decisive “if” game. The Panthers prevailed 11-7.

In a rematch of the 2021 60+ AA finals, The Starboard/OTS of Delaware and Bucks Run Farms of Nebraska needed two championship games to decide the winner. All six teams in the division finished pool play 1-1. Starboards, the second seed, defeated Bucks Run, the fifth seed, 21-19 in the finals of the winner’s bracket. Bucks Run knocked off Full Throttle 15-12 in the elimination bracket to reach the title game. Bucks Run won the first championship game 16-7. In the “if” game, Starboard claimed a thrilling 20-16 back-and-forth battle. Full Throttle won three elimination games before finishing third.

Via Citrus 65 of Florida survived two thrilling games against North Idaho Softball Club to win the five-team 65+ Major division with an unbeaten record. Via Citrus defeated North Idaho 22-21 in the finals of the winner’s bracket and won the championship game over North Idaho 26-23. Third place went to Slug-A-Bug of Florida.

The 65+ AAA title went to the unbeaten and top-seeded Florida Mustangs (photo below), which defeated Texas Thunder 16-1 in the title game of a seven-team bracket. Texas Thunder entered bracket play as the last seed but knocked off the second and sixth seeds to reach the winner’s bracket finals. Thunder lost that game to the Mustangs 19-9 before defeating Talaga Construction 18-17 in the third-place game. 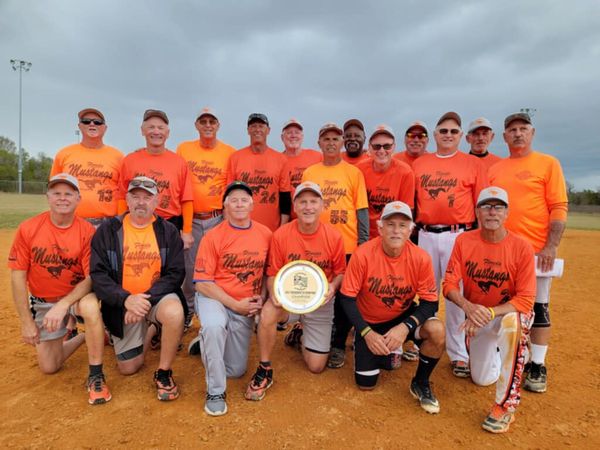 MP Components/Bomb Squad of Michigan won both games of a best two-of-three bracket against the Montana Cutthroats for the 65+ AA title. Final scores were 24-10 and 21-16.

The 70/75+ Gold division featured eight teams for pool competition with teams then breaking into two brackets. Venom defeated Lane Construction 16-15 in the first of a two-out-of-three Platinum bracket. The teams decided not to play on Sunday because of adverse weather.

The Bulls from Florida won the six-team 70+ Silver division after starting bracket play as the fifth seed. They won 22-10, 17-8 and 15-4 before entering the title match against the Long Island Jaguars 70s Red team, which fought all the way through the elimination bracket to reach the championship game. The Bulls won the title 19-9. Third place went to the Syracuse Cyclones.

Eight teams combined for pool play in a 75/80+ Gold division before splitting into two groups for bracket play. AMR South 75s and Florida Investment Properties 80s were to play a best-of-three series for the 75/80 Platinum title. However, after AMR won the first game on Saturday, the teams decided not to play in the rain on Sunday.

Meanwhile, six teams battled for the 75/80+ Gold division title, a bracket that featured three one-run contests between the final two teams. In the finals of the winner’s bracket, the Minnesota Masters defeated Midwest Express (photo below) of Iowa 10-9. In the elimination bracket, Midwest Express beat the Long Island Jaguars 75s 16-6 to set up a rematch with Minnesota. In a thrilling finish to the division, Midwest Express double-dipped Minnesota 13-12 and 12-11 to capture the crown. 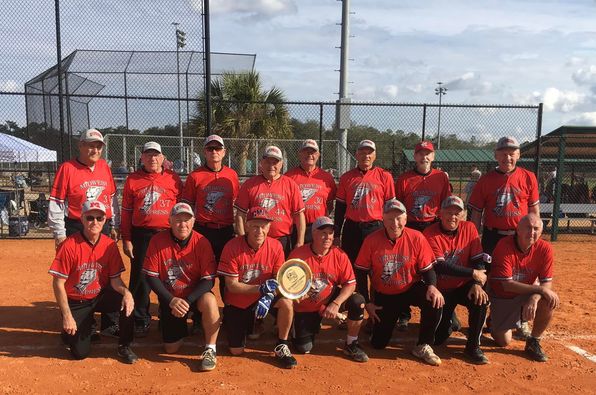 The men’s 75/80+ Silver division involved one 75+ AA team and three 80+ AAA teams. The “youngsters,” also known as the Minnesota Lumberjacks, beat up on their elders and won all six games they played. Minnesota defeated the second-place Syracuse Cyclones 16-5 in a game that started as a nail bitter before Minnesota pulled away. The Chicago Geezers finished third.  The Cyclones claimed the 80AAA title.

In the 85+ Senior Division, Center 4 Sight (photo below) from Florida and Team Rehabilitation from Minnesota played a best-of-three to determine a champion. Center 4 Sight finished off Team Rehab in two games, winning 13-8 and 14-11.