Close games, spirited action, a stolen glove, a game-ending triple play, and a wide range of weather culminating in a beautiful championship Sunday highlighted action in the Southwest Championships held in Las Vegas and its suburbs April 19-24. 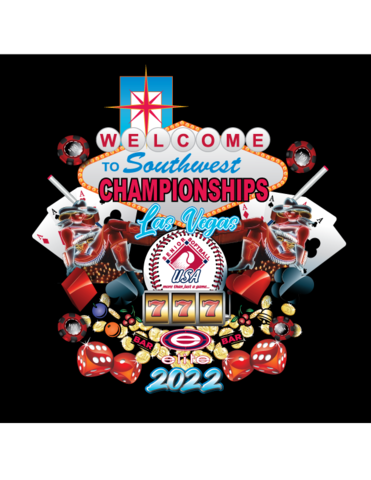 Twenty-nine teams qualified for the 2023 Tournament of Champions in Florida by winning titles at the event, which has grown into SSUSA’s second-largest annual tournament. This year, 245 men’s and women’s teams entered. Together, they played nearly 790 games.

Throughout the tournament, spectators saw seesaw battles culminate with walk-off home runs or sparkling defensive plays. A triple play ended the first bracket game in the 70 AAA division between the Sacramento Islanders and Duke City. With no outs in the top of the seventh inning and runners on first and second base, Duke City hit a short fly to right field. Islander right fielder Charlie Stebbins caught the ball, threw it to first baseman Bruce Gilmore for the second out, who pivoted and threw it to Craig Nakahara at second for the third out to end the game.

And in the strange category, a schoolgirl passing through Hollywood Park enroute to her middle school stole a ball glove from its fence-top perch. A sharp-eyed outfielder saw the theft and shouted an alarm. Two players and tournament director Reggie Weathersby chased the girl down a hill and into a park, where she discarded the glove. At Weathersby’s request, she apologized. 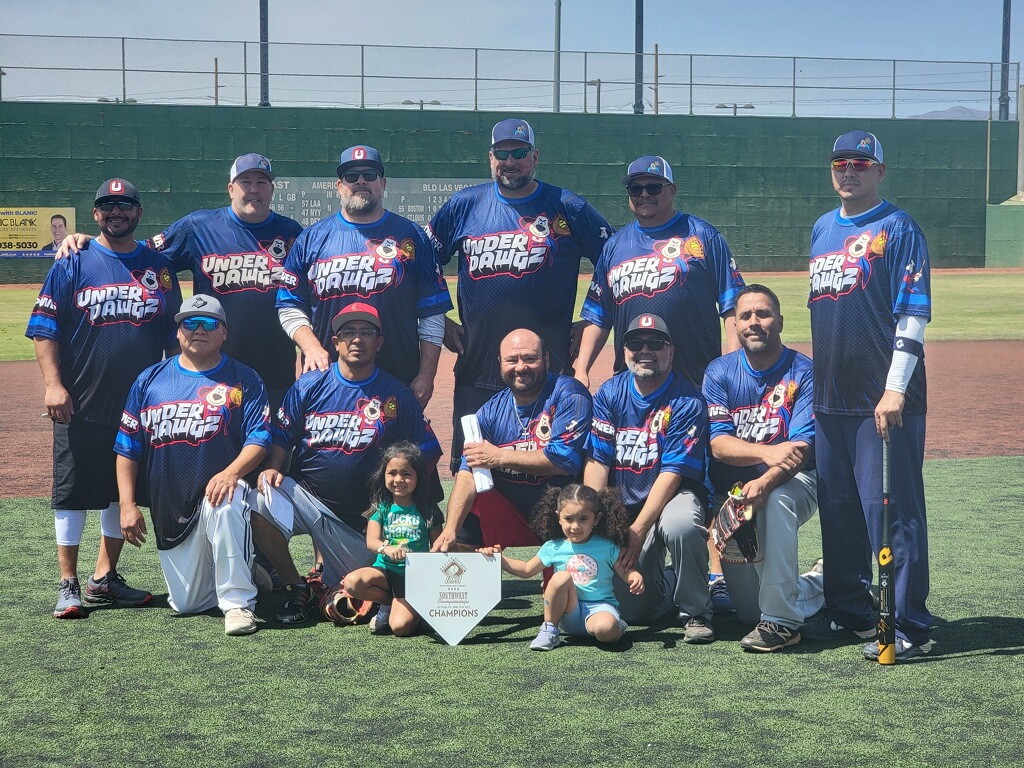 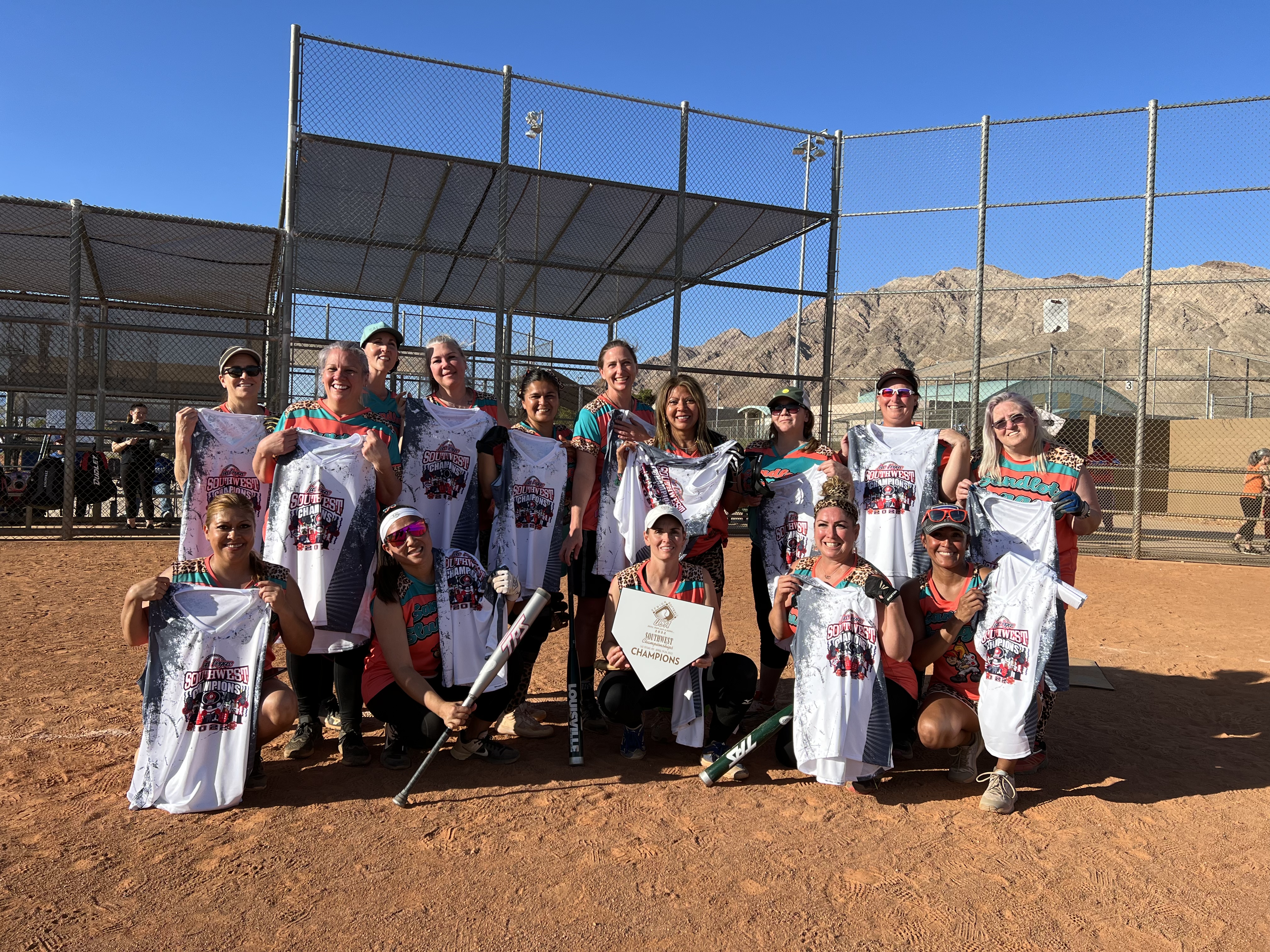 In the 10-team women’s 40+ Major division, top-seeded TABU of California completed an unbeaten tournament with a 14-3 victory over second-place Tharaldson of Nevada. HTS-Here To Smash of California finished third.

Top-seeded Freak Show of California lost only one game enroute to winning the 14-team women’s 40+ AAA division. Freak Show defeated Notoriously We Gucci 17-2 in the “if” game after losing the first title game 14-11. Gucci won six elimination games to reach the championship. Not Today of Nevada took third.

The two-team women’s 50+ Major division played a best-of-three bracket. Cali Gold lost the first game 13-6 but rebounded with 7-6 and 16-9 victories over Karphone 50s of California. 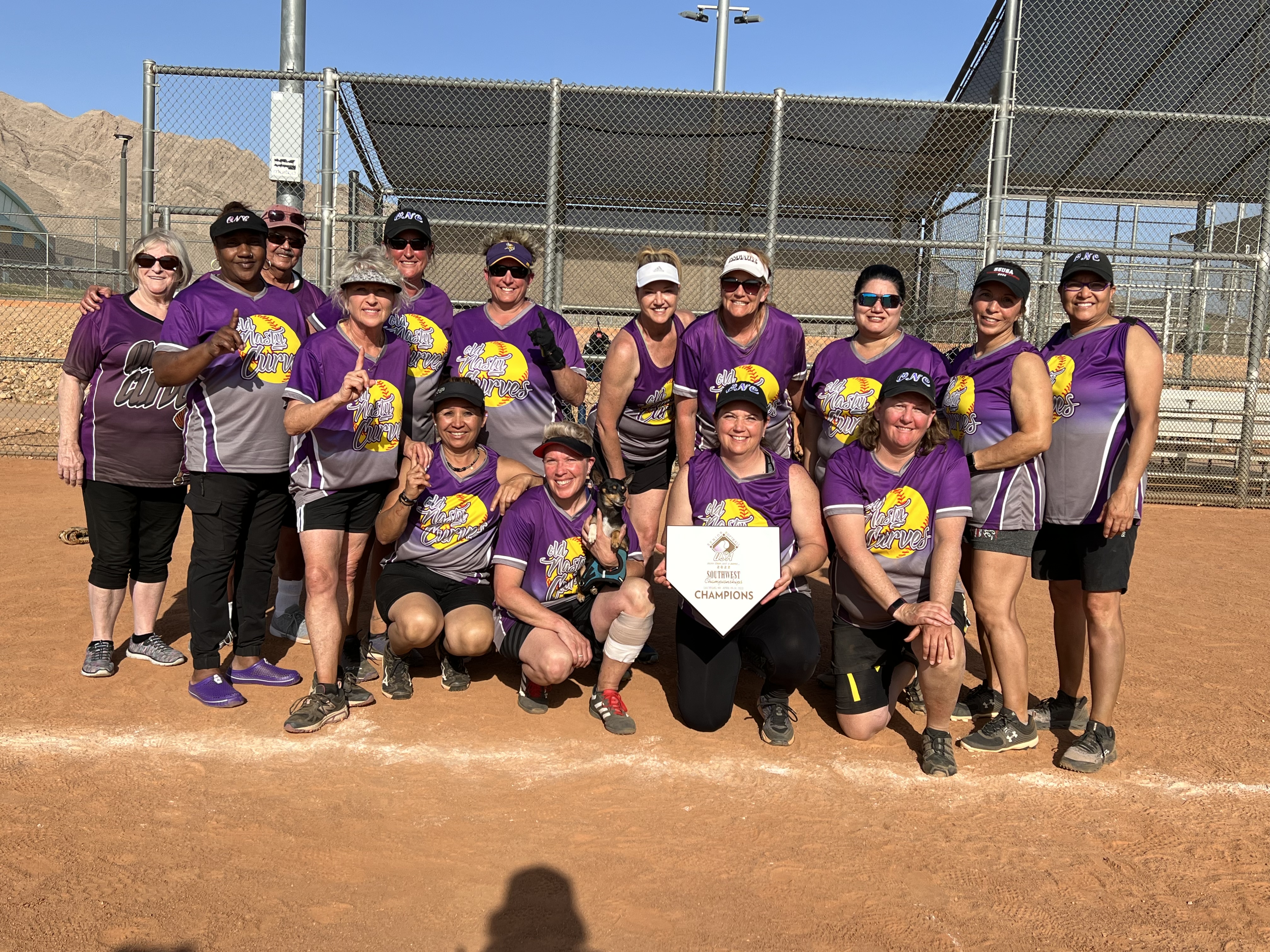 Ten teams competed in the men’s 50+ Platinum division won by Stadium, which ended the title game with a sterling double play. Stadium, a California team that finished undefeated (photo below), led Amigos 50s of Arizona 20-18 with one out in the seventh inning when an Amigos runner tried to score from second base on a fly out to the outfield. Stadium’s relay throw beat him by a step at the plate. Shakas of California won four elimination games to finish third. 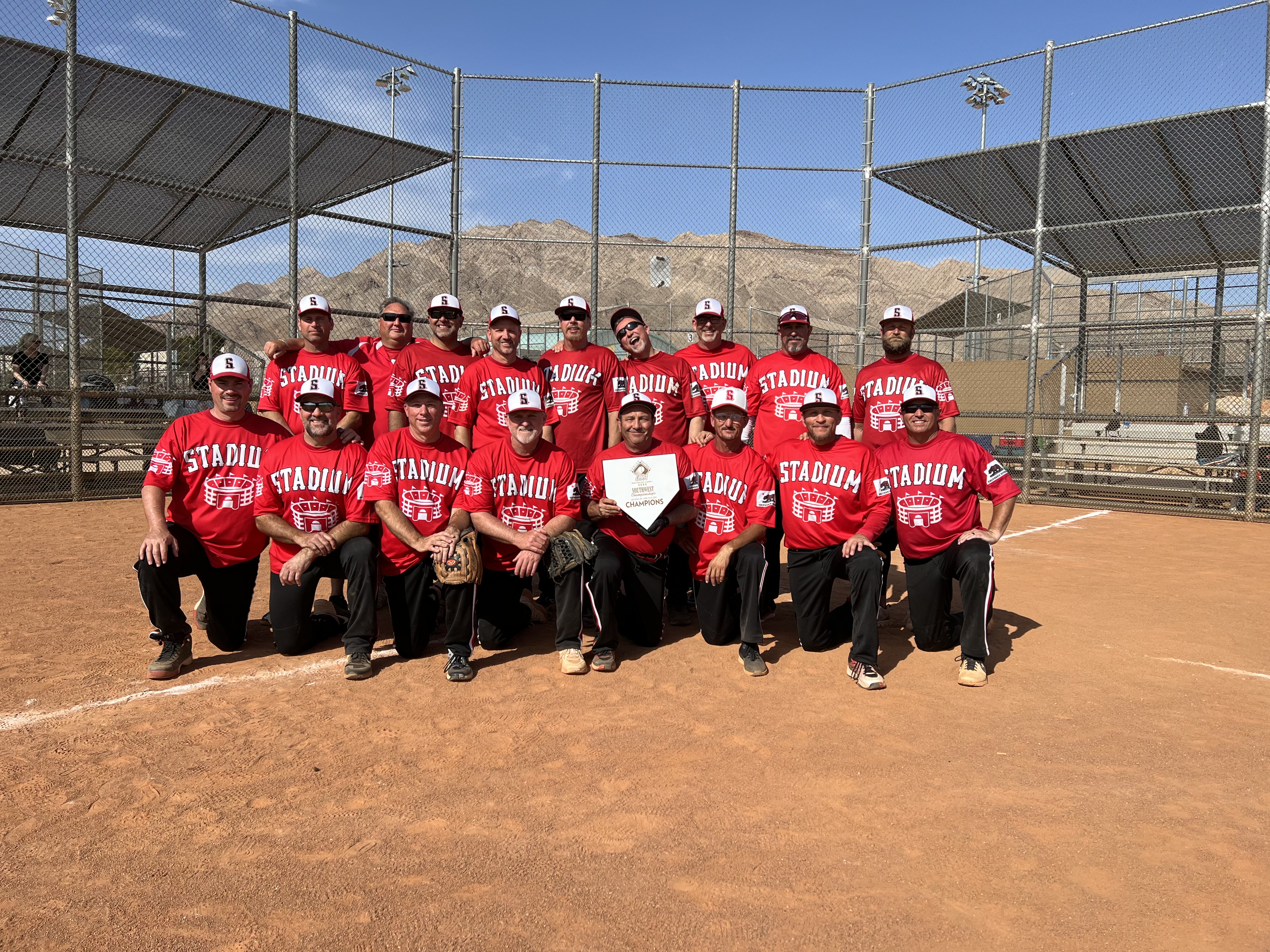 In the 17-team men’s 50+ AAA division, top-seeded Kons Trenching of Wisconsin won the title with a 12-1 victory over Team SMS of Nevada in the “if” game. Team SMS dealt Kons its only loss, 12-5, in the first championship game. CaliGold won five elimination games to finish third.

In one of the few brackets where the top two seeds reached the championship game, first seed L.A.F. 55 of California double-dipped ShowTime So Cal 18-15 and 22-9 to win the 11-team 55+ Major division. ShowTime had nipped L.A.F. 21-20 in the winner’s bracket finals. Arizona Old School placed third.

Legacy Sports USA of Arizona won the men’s four-team 60+ Major Plus division by beating LPC of California 21-11 in the “if” game after losing 28-24 in the first championship game. CornerStone of Oregon took third.

Two Colorado teams battled for the championship of the men’s 15-team 60+ Major division. Peak/Scrap Iron 60s earned the crown by defeating Scrap Iron Rocky Mountain Thunder 20-19 in the “if” game after losing 17-2 in the first championship game. Express of California placed third.

An “if” game also was needed to decide a highly competitive 17-team men’s 60+ AAA division. The top-seeded Silver Stars of California lost the first championship game 24-22 before winning the second 20-19 over the Arizona Scorpions. Los Vatos Viejos 60s II finished third after losing its final game by one run.

The top-seeded SoCal Titans took the long route to win the men’s six-team 60+ AA division. The Titans lost their first bracket game 18-14 before rattling off five victories in a row, including 11-9 and 17-11 over second-place Arizona Blaze in the championship games. Tri City/Time Share of Washington placed third. 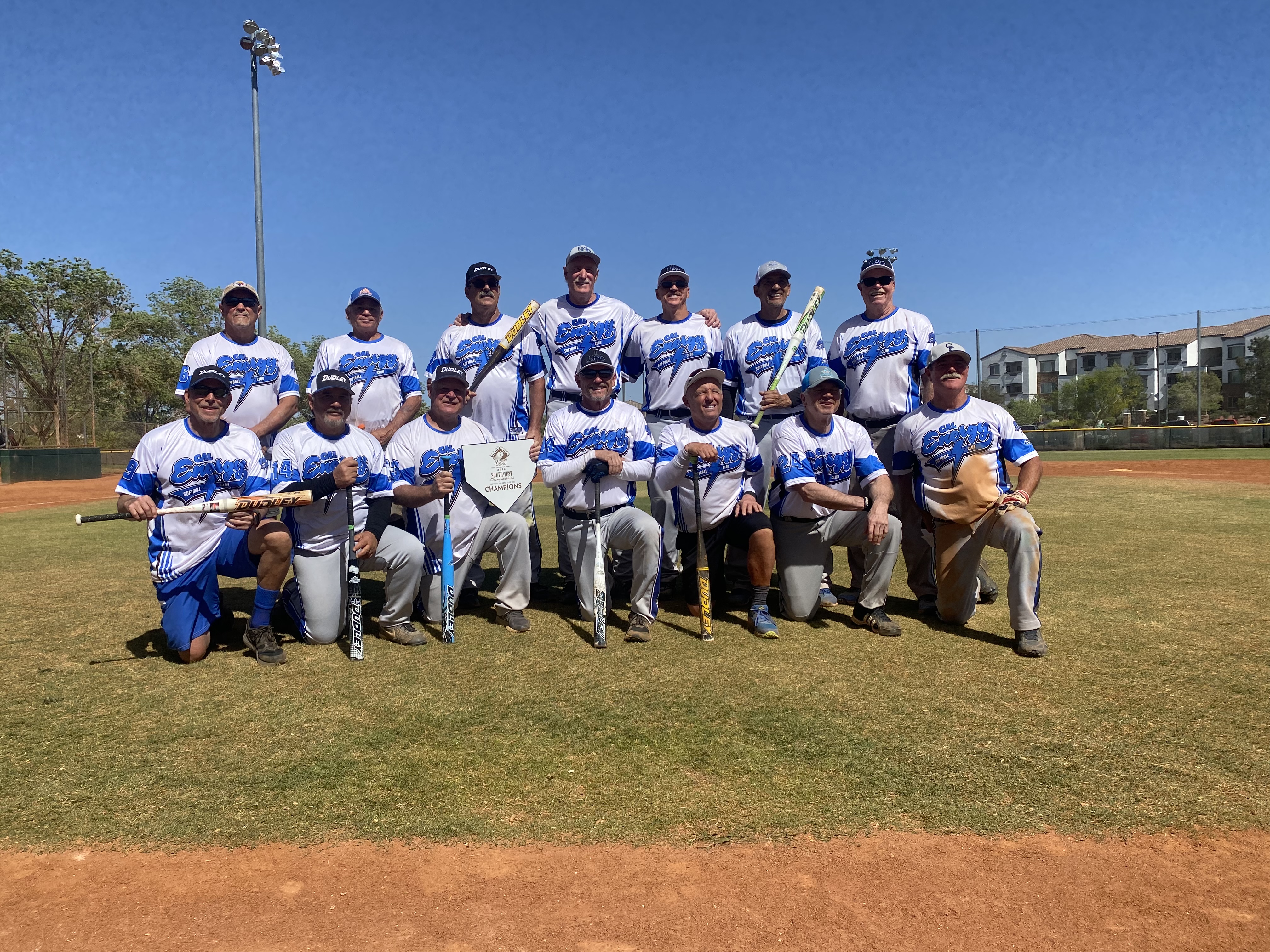 Sin City Mob from Nevada raced undefeated through the men’s 15-team 65+ AAA bracket. It capped a 7-0 tournament by winning its final three games by an average of nine runs, including a 25-16 finale. Second-place Full Throttle of Arizona won seven elimination games to reach the championship. Weakened Warriors of California placed third.

Arizona Ancient finished an undefeated run through the men’s eight-team 70+ Major division with a 21-15 title game victory of the Arizona Scorpions. Over The Edge from California took third.

Ryan’s Way, (photo below), the eighth seed in the men’s 15-team 70+ AAA division, started bracket play by knocking off top-seeded D&K Softball 18-11. From there, Ryan’s Way just kept winning. It defeated second-seeded Last Call of Nevada 13-10 in the championship game after Last Call won seven elimination games to get there. No Guts, No Glory of California placed third. 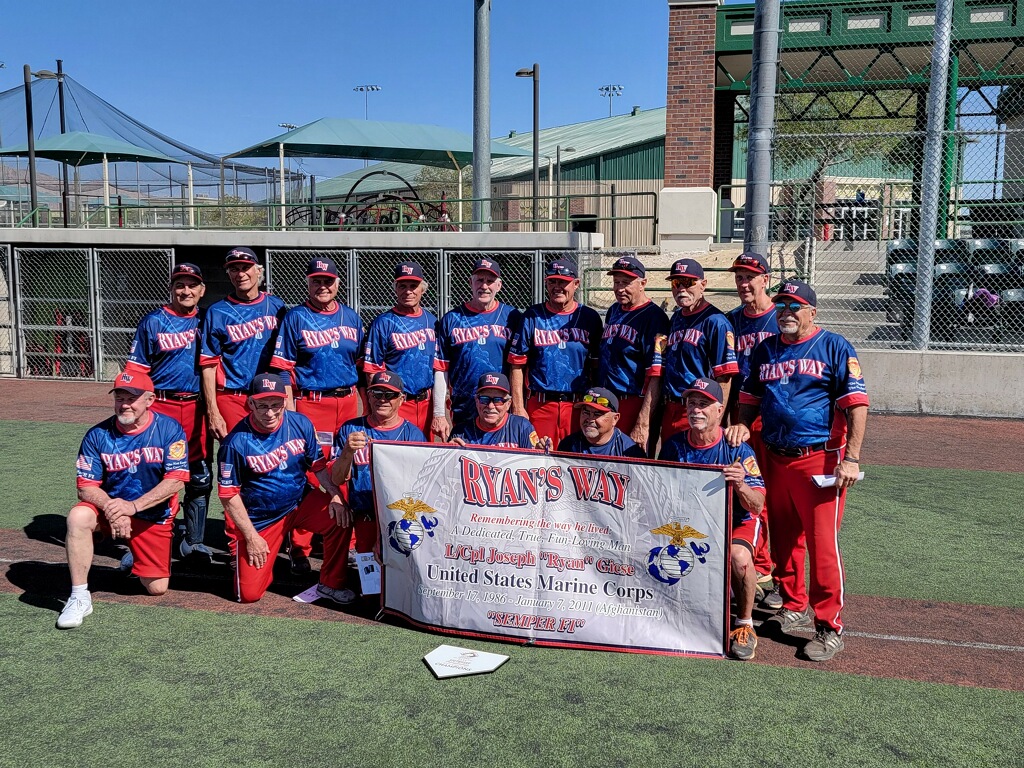 In the only one-run game of the men’s three-team 70+ AA bracket, the Las Vegas Desert Heat defeated California’s Git-R-Done 17-16 to win the championship. Franklin Loan of California took third.

The men’s seven-team 75+ Platinum division played a round-robin format. Omen 75, (photo below), the only Major Plus team in the division, won the title with a 6-0 record that included four one-run victories. Runner-up Sidewinders of Arizona won a TOC bid and the 75+ Major title by notching a 5-1 record. The Tri-State Diamondbacks of New Mexico finished a game back at 4-2. 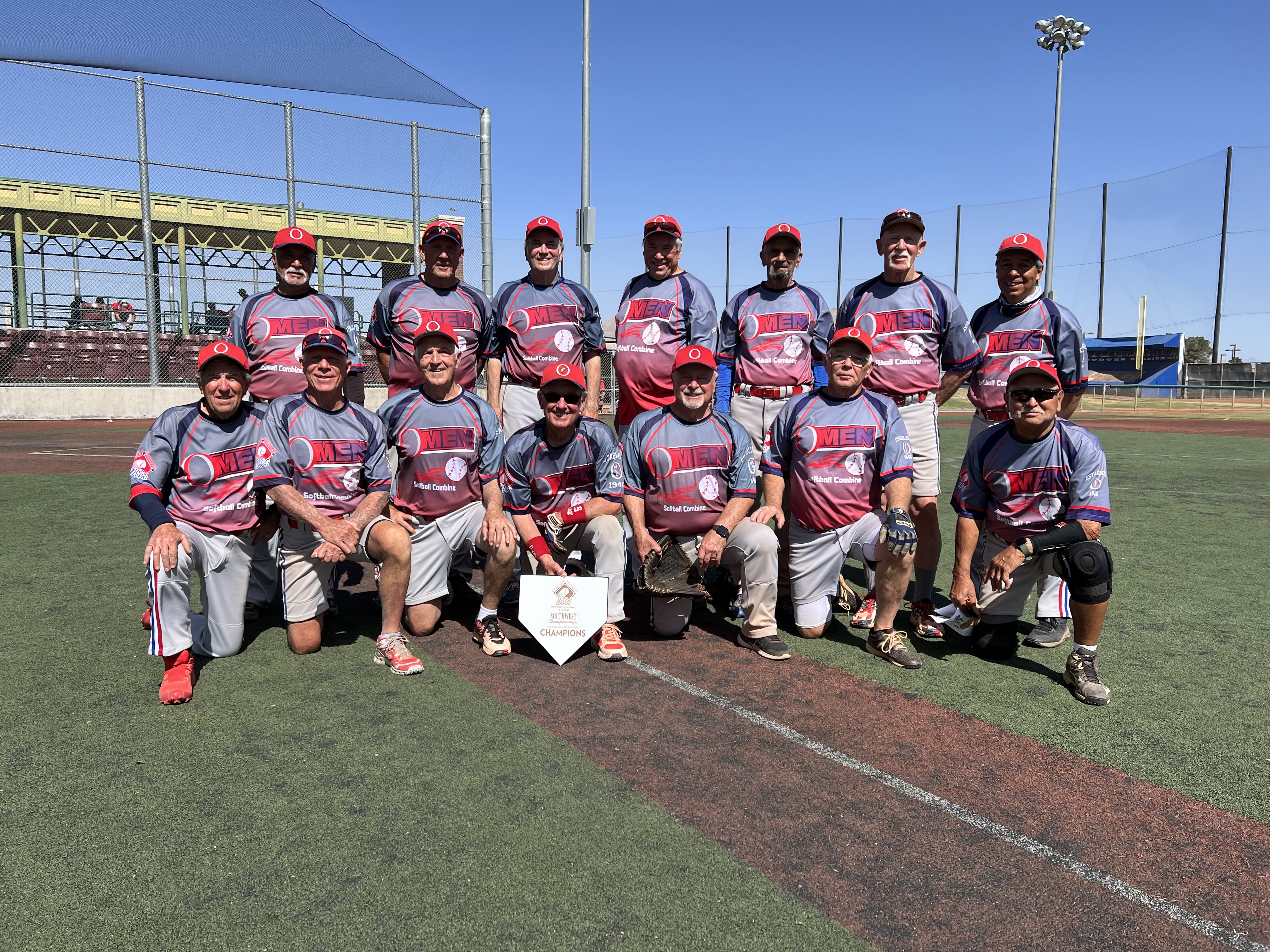 The eight teams in the men’s 75+ AAA bracket also played a round-robin format. The Scrap Iron Diamonds of Colorado won three one-run games and notched a 6-1 record to take the title. Vegas Strong earned second place with a 5-2 record that included an 8-5 victory over third-place Al’s Sport Shop of California, which also finished 5-2. 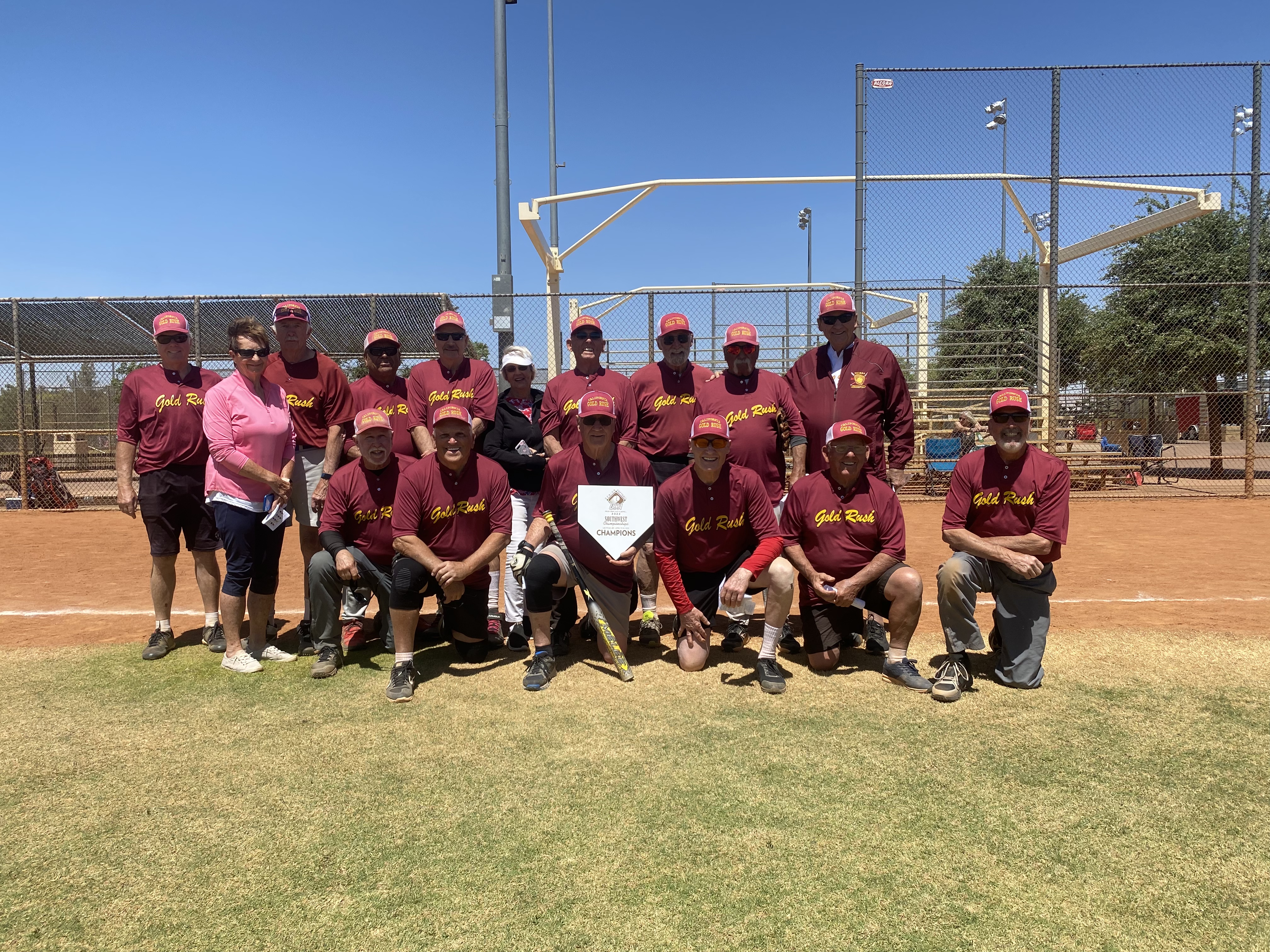 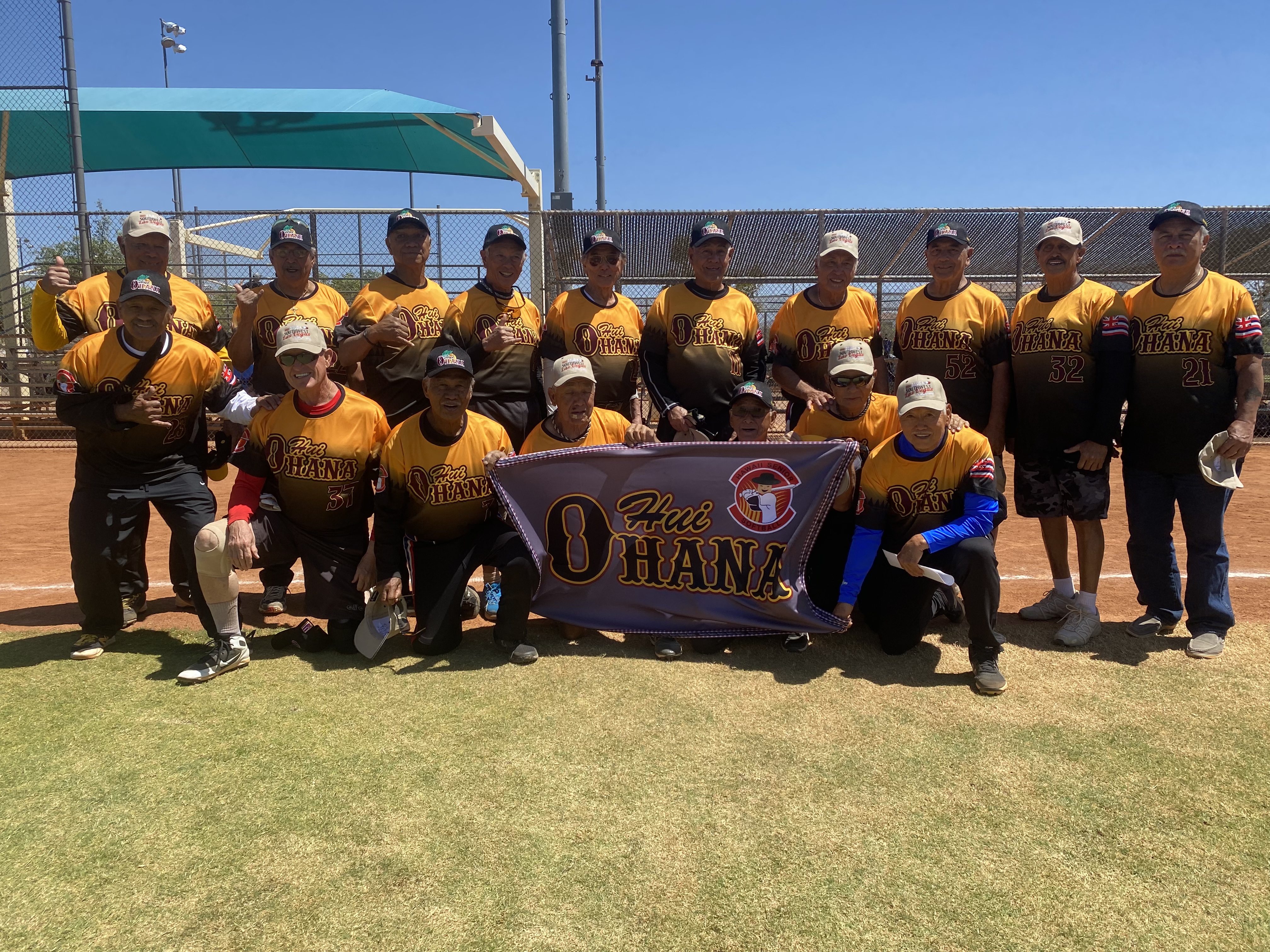